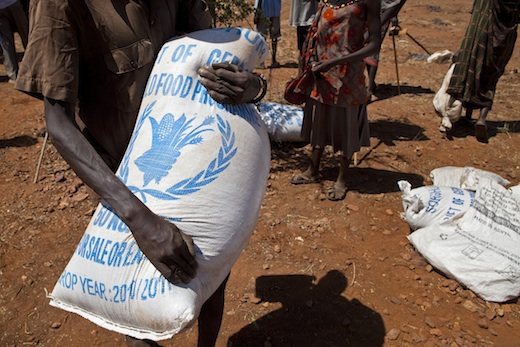 Increasingly attention is being given to documenting the extent to which Africa (and the rest of the developing world) is in fact providing development aid, as opposed to being a recipient of Aid. This aid is being provided through myriad ways including financial relations, subsidising ecological resources, provision of ready trained skilled labour and, increasingly, providing holiday resorts of unbeatable value.

The slave trade was the most visceral manifestation of the ongoing exploitative relationship between Africa and the rich world. The haunting images of manacled Africans toiling in the cotton fields of the USA have now been replaced with images of starvation, war, brutality, fecklessness and HIV. These graphic images, beamed throughout the world, perpetuate a sense of need and dependence that serves the purposes of powerful and wealthy states. Such images make it easy to believe that Africa both requires and could benefit from Western Aid. This however belies the real relationship between Africa and the West. In reality, in order to understand Africa’s relationship with the developed world, it is important to look at figures which show that, far from contributing nothing to the economy of developed countries and taking everything in return, Africa’s contribution to developed countries could be considered as its own form of development aid.

According to Jubilee Research the accumulated external debt of the world’s richest country, the USA, is $2.2 trillion – almost the same as the $2.5 trillion owed by the entire developing world including India, China and Brazil. They calculate that this means that every American citizen owes the rest of the world $7,333 while every citizen of all the developing countries only owes the rest of the world $500. Meanwhile the poor are financing the debt of the developed world, as capital flows from poor countries, helping to lower rich countries interest rates and inflate the value of their currencies, enable them to purchase goods from the rest of the world far more cheaply than they would otherwise have been able to do.

Jubilee Research have also quantified the economic damage attributable to natural disasters arising from climate change as being more than $300 billion per annum. Industrialised countries (at least historically) are almost entirely responsible for human driven global warming although 96% of all deaths from natural disasters occur in developing countries. The value of economic output built on growing ‘carbon debt’ (in which carbon debt is calculated according to the amount by which a country exceeded its fair share in the emission of greenhouse gasses) attributable to the G7 countries, was estimated as being in the region of $13- 15 trillion for a typical year in the 1990’s – while the conventionally indebted poor countries had a carbon credit that could be valued at three times their orthodox debt. Thus if this concept of debt is used, the developing world is subsidising the rich world and should perhaps be considering what structural adjustment processes the rich world needs to put in place in order to meet their debt repayments.

The UNDP calculated that by 1987 nearly one third of Africa’s skilled people had moved to Europe – Sudan lost 17% of doctors and dentists, 20% of University teaching staff, 30% of engineers and 45% of surveyors in 1978; 60% of Ghanaian doctors trained in the early 80s are now abroad; and Africa as a whole is thought to have lost up to 60 000 middle and high level managers between 1985 and 1990. This reverse subsidy seems set to continue. Some estimates indicate that mechanistic and flawed developed country staff forecasting needs mean that the USA, for example, will require 1 million additional nurses in the next ten years to meet its shortfall.

Writers on human resources such as Bundred and Martineau put the cost of training a GP as US$60 000, calculating a reverse subsidy from the developing world of US$500m per annum just for health personnel. In South Africa alone, the loss of more than 82,000 skilled personnel over an eight-year period between 1989 and 1997 is estimated to have cost the country US$5 billion. UNCTAD quantified US savings of US$3.86 billion in training costs as a result of importing 21 000 Nigerian doctors over a ten year period.

Central to these startling statistics are structural adjustment programmes. Rather than providing restitution for the period of formal occupation of African Countries that took place between the 1880s and 1960s, the West channelled large sums of monies into newly independent African countries through massive bank loans. In the process a number of Banks became severely stretched. With the 80s came an intense period of structural adjustment programmes, the immediate objective of which, according to Walden Bello, was to rescue banks that had become overextended; the longer-term objective was to further integrate Southern countries into the North dominated world economy. Although initially few countries were keen to take structural adjustment loans, as more and more countries ran into difficulty servicing the huge debts made to them, so they had no option but to ‘structurally adjust’.

Structural adjustments demanded that, as a pre-condition to receiving aid, developing countries open their markets to globalisation and privatise their utilities such as water and electricity services. Among the other requirements were tightening of state expenditure and devaluation of currencies resulting in an end to free health and education and dramatic cut backs in these services.

The withdrawal of resources for education and health initiated a cycle of deprivation in which working conditions, including salaries deteriorated, triggering an exodus of staff and further debilitating the services. Simultaneously, funding of academic training institutions was reduced, and there was a concurrent flight of intellectuals and decimation of institutions of higher learning. Philip Altbach calculates that roughly 1.5 million students (most of whom leave the South to study in the North) study in countries outside their own, and a significant number do not return.

The net effect has been to strip countries of a significant component of their social capital and create a vacuum of skill, conveniently providing jobs for highly trained Westerners, (to be paid for in hard currency) and simultaneously the conditions for Africa to be reduced to providing technical level education and producing a workforce only fit to do the dirty jobs of the rich world.

And just as there seems to be broad agreement that Structural Adjustment has not been beneficial to Africa, General Agreement on Trade in Services (GATS) is ready and poised to fill the gap. The combined worth of health and education markets is estimated to be US$5 Trillion according to Bertrand and Kalafatides. If the major proponents of GATS have their way, all these services will be up for grabs by powerful Transnational Corporations, and the right of African States to provide these common goods will be emasculated.

What the figures above show is that, combined with conditions like structural adjustment and GATS, the cycle of development aid from Africa to Europe and the rest will be continued. For African intellectuals, students, political activists and Africanists everywhere this signals a call for international solidarity of the kind inspired by the anti-apartheid movement – as a countervailing force against the new world order that compels Africa to continue to feed the bloated stomach of greed.