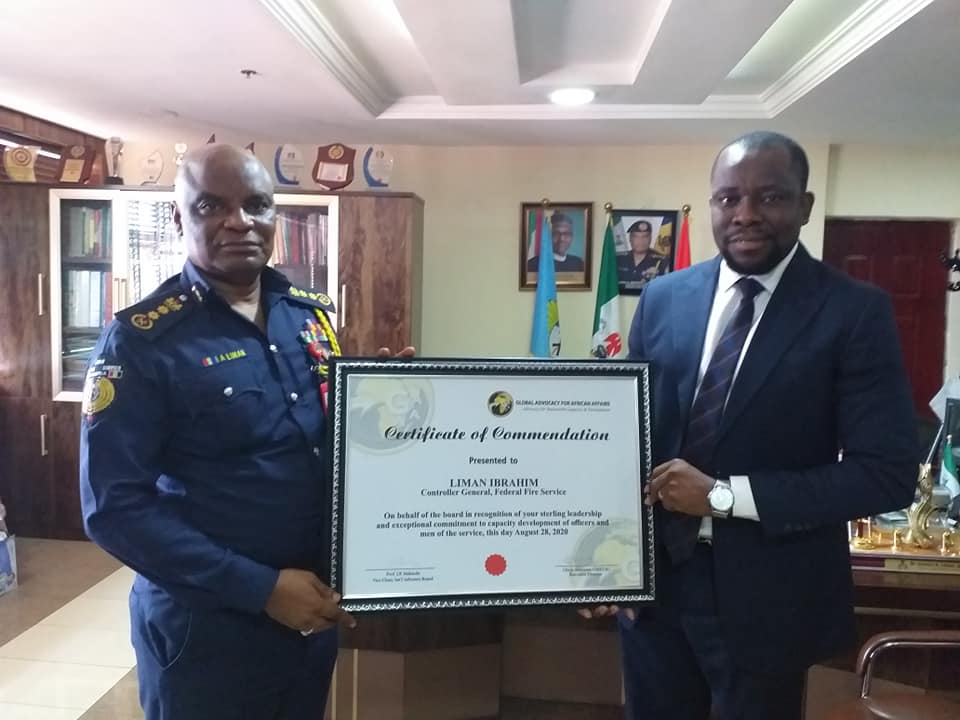 The Controller General of the Nigeria Federal Fire Service, Alhaji (Dr) Liman Ibrahim has been presented with a Certificate of Commendation by the leadership of the Global Advocacy for African Affairs, Africa’s leading development advocacy organization with international office in London, United Kingdom.

Presenting the certificate on behalf of the board of the organization, on Thursday September 10, the Executive Director, Chrys Anyanwu recalled the efforts and commitment of the organization especially in the areas of governance, political leadership, Afri-development and policies as well as gender equality in Africa through consistent advocacy, engagements and using the instrumentality of their various sector base conferences and dialogue within Africa and major cities of the world. He further identified leadership especially in the public service as one area that requires close attention particularly considering its posturing as the policy execution arm of the government, the reason while the organisation has decided to focus more and redirect their spotlights on heads of ministries, department and agencies of governments in Africa.

He further highlighted the achievements of the Fire Service boss in just a little over one year of his appointment by President Muhammadu Buhari to include;

2. Procurement and commissioning of 16 modern fire trucks which have been deployed to the newly created zones

3. Renovation of the Nyanya Fire Station in Abuja.

6. Training of 40 personnel in different areas of Disaster Management in UK, USA, South Africa and Dubai.

8.  Professional support to the State Governments in improving their State Fire Services.

9. Successful Organization of the annual National Fire Conference in August 2019, in Ilorin, Kwara with all stakeholders in attendance.

10. Expansion of the National Fire Data Repository Centre (NFDRC) to 8 locations across the country.

11. Provision of 35 units of e-Comm Radios NFDRC integrated across 13 States.

12. Promotion of staff as at when without delay and general improvement of staff welfare.

The certificate of commendation is in recognition of what the organization refers to as “Sterling Leadership and Exceptional Commitment to the Capacity Development of Officers and Men of the Service.”

In his reaction, the Fire Service boss who could not hide his joy appreciated the organization for finding him worthy and also maintained that the commendation for him is another call to more work and as well reinstate his commitment to ensuring a more effective and motivated Federal Fire Service.