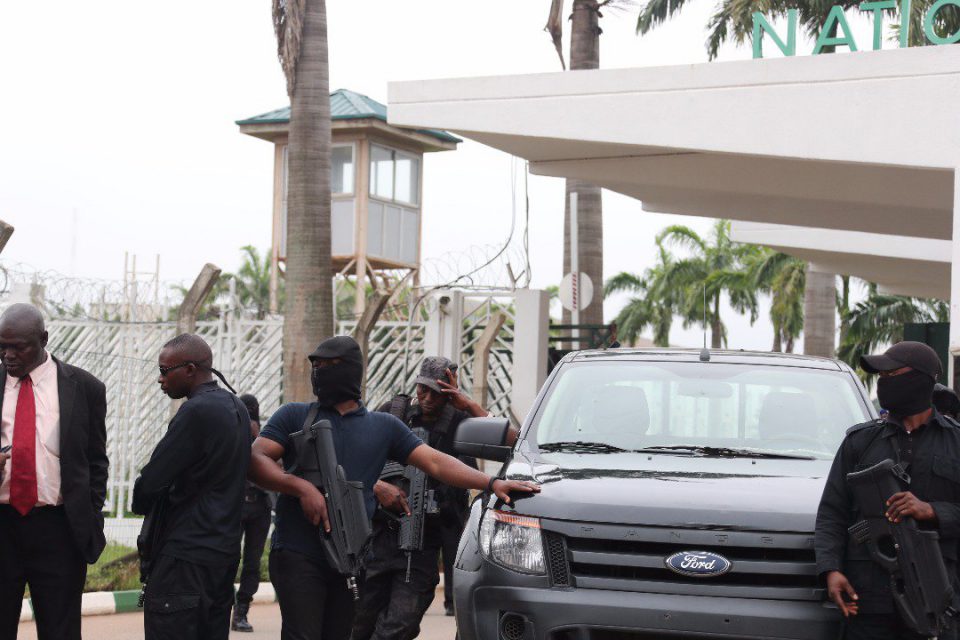 Nigeria’s secret police boss was fired hours after armed security agents temporarily blocked the entrance to the National Assembly in a sign of heightening political tensions before elections in February.

Vice President Yemi Osinbajo, who’s acting head of state while President Muhammadu Buhari is on vacation in the U.K., ordered the dismissal of State Security Service Director General Lawal Musa Daura “with immediate effect,” according to a statement, which gave no explanation. His ouster capped a day of drama in the capital, Abuja,that started with secret police officers wearing masks and their standard black uniforms turning away legislators, reporters and staff as they tried to enter the National Assembly complex.

“The vice president clearly is in damage-control mode,” Malte Liewerscheidt, vice president of the risk advisory group Teneo Intelligence, said by phone from London. “He realized that the actions of this morning were damaging to the image of the government.”

Later, lawmakers were allowed in one by one, while reporters and staff were kept outside. The secret police officers left the site shortly after their chief was fired.

Africa’s top oil producer has seen increasing political turmoil in the past weeks. Dozens of legislators, including Senate President Bukola Saraki and several governors, walked out of the ruling All Progressives Congress to join the ranks of a swelling opposition. Buhari is seeking re-election next year.

A key question is whether Osinbajo obtained the president’s approval for the decision to fire the state security service boss, who’s from Daura, the same hometown as Buhari.

“This is a major decision because Lawal is very close to Buhari — he is part of his circle,” Liewerscheidt said.

While the Senate and the House of Representatives are on recess and meant to resume on Sept. 25, the leadership of both chambers was due to gather Tuesday “to consider some national issues,” and to meet officials from the national electoral commission, according to an aide to Saraki, Bamikole Omisore. Both meetings were canceled.

“A meeting cannot be held in this kind of atmosphere,” Deputy Speaker of the House of Representatives Yusuf Lasun told reporters. “It’s unfortunate that this is happening because when the parliament is under siege, democracy is under siege.”

The scenes at the National Assembly occurred amid increasing speculation that the ruling party wants to impeach Saraki as the Senate president.

“Whether they succeed in removing Saraki or not, it is going to be a major issue because the National Assembly legally adjourned sitting, you cannot reconvene without the authority that adjourned it,” said Freedom Onuoha, a political science lecturer at the University of Nigeria in the southeastern town of Nsukka. “The law still recognizes Saraki as the Senate president.”

A standoff between Buhari and Saraki and other lawmakers has been largely responsible for the stalemate between the executive and legislature that’s hobbled the government for the past few years.

A presidential adviser, Ita Enang, said the government was at risk of shutting down unless lawmakers returned earlier from their current break to pass a supplementary budget.

Buhari on July 17 asked lawmakers to reallocate 229 billion naira ($633 million) in a supplementary budget, less than a month after he signed 2018’s spending plan into law.

The APC distanced itself from the trouble at the parliament.

“The party is monitoring the developments in the National Assembly like every other concerned Nigerian and stakeholder,” its acting spokesman, Yekini Nabena, said in an emailed statement. He said APC chairman Adams Oshiomhole had nothing to do with the events.