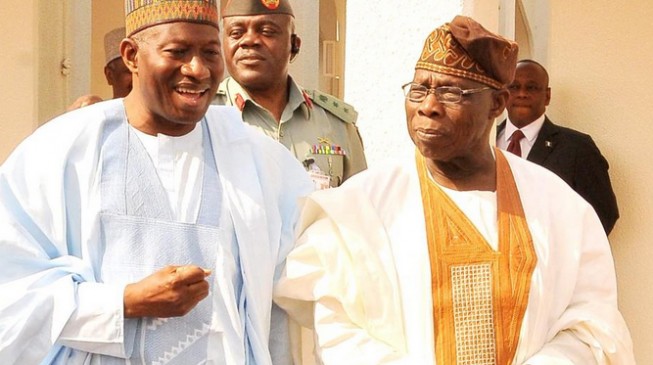 After over two years of what seemed like a cold war between former presidents Olusegun Obasanjo and Goodluck Jonathan, the two Nigerian leaders on recently, publicly reconciled and harped on the virtues of forgiveness and national unity.

Obasanjo who was also treated to a luncheon in Jonathan’s country home in Ogbia maintained that without reconciliation, peace and unity would continue to elude the nation.

Though Jonathan had visited the Ota, Ogun State home of Obasanjo once after his defeat in 2015, many believed that until the second leg of the visit, which the former Army general promised Jonathan at the time, the rapprochement between the two leaders was still doubtful.

Obasanjo had withdrawn support for Jonathan’s desire for a second term of office in 2015. It was generally believed that the latter’s defeat by President Muhammadu Buhari in that election was largely aided by the former, sparking off a period of cold relationship between them.

But all that seems to have made way for peace as the both former presidents recently during a church service in the country home of the immediate past Nigerian  president Jonathan urged Nigerians to draw a lesson of tolerance from both the homily by the Vicar, Bishop Aye Oruwori and the dance performance by a group of youngsters bordering on unity in diversity.

The service was also attended by Jonathan’s wife and mother, Eunice and Patience; the State Governor Seriake Dickson; his Deputy, John Jonah. Obasanjo said: “God who knows the end from the beginning knew that this day will come to pass. What touches me most in this service is the children dressing in the attire of different cultures, tribes and tongues in Nigeria. That underpins the homily he (the Bishop) gave to us: reconciliation.

“And if we do not have growth, we will not come out of poverty. Some of us are exceptionally lucky to have been able to get out of poverty. Majority of us will still be poor (without peace and reconciliation). All that we pray is that this country should be a country of milk and honey, a land of prosperity”, he said.

He added that God who brought Nigerians together within the same geographical space had a reason for doing so and urged Nigerians to unite and build a strong nation.

According to him: “Wherever God has made us to be, what is important is the goodness of Nigeria and whatever we can do as individuals and collectively, let us do it.

“They say history repeats itself, but history doesn’t repeat itself, but its human beings that keep making the same mistake and then say history has repeated itself. The Bible says we shall know the truth and the truth shall make you free.

“Many of us here do not know the value of freedom because you have never lost it. I had lost mine. There’s nothing better than freedom, except life and if you have life without freedom, it means you don’t have a life.”

On his part, Jonathan said Obasanjo’s visit was in fulfilment of his promise to see him in his village after the former visited Obasanjo earlier.

He noted that just like Obasanjo, he was of the view that reconciliation, peace and unity were important in life, adding that what is in the media today gave the impression that Nigeria was sitting on a keg of gunpowder.

He said: “President Obasanjo promised to visit me here but I didn’t know it would come so soon. He has visited my village two times within a three-day programme. To me, I have to thank everyone who has made this possible.

“Like President Obasanjo said, the crowning was the young people. When they came out to perform in different cultures and different languages, different dance steps. I pray that someday all the churches and mosques will bring children together like this to pass on the message of unity.

“Because if you listen to the radio, watch television and you go on the social media, it looks as if the country is just hanging (sitting) on a keg of gunpowder that can explode at any moment. I think the children have taught us a lesson, a message of unity”, Jonathan said.

Dickson had earlier praised Obasanjo for visiting the state, commending him where necessary and pointing out areas that could be improved upon.

Dickson said: “It’s not every day that you see two former presidents attending functions together for three days. This is a special community which is also my community. My leader and elder brother (Jonathan) said I must greet my people. So, I do so on instructions which I cannot disobey.

“This is the second time on this trip we are in Otuoke. He (Obasanjo) has been going around encouraging us and telling us how we can get things better. In the course of his visit, we have showcased Bayelsa to the rest of the world. Today, we have a Bayelsa at peace with itself and the rest of the world. A state that represents all things good.”