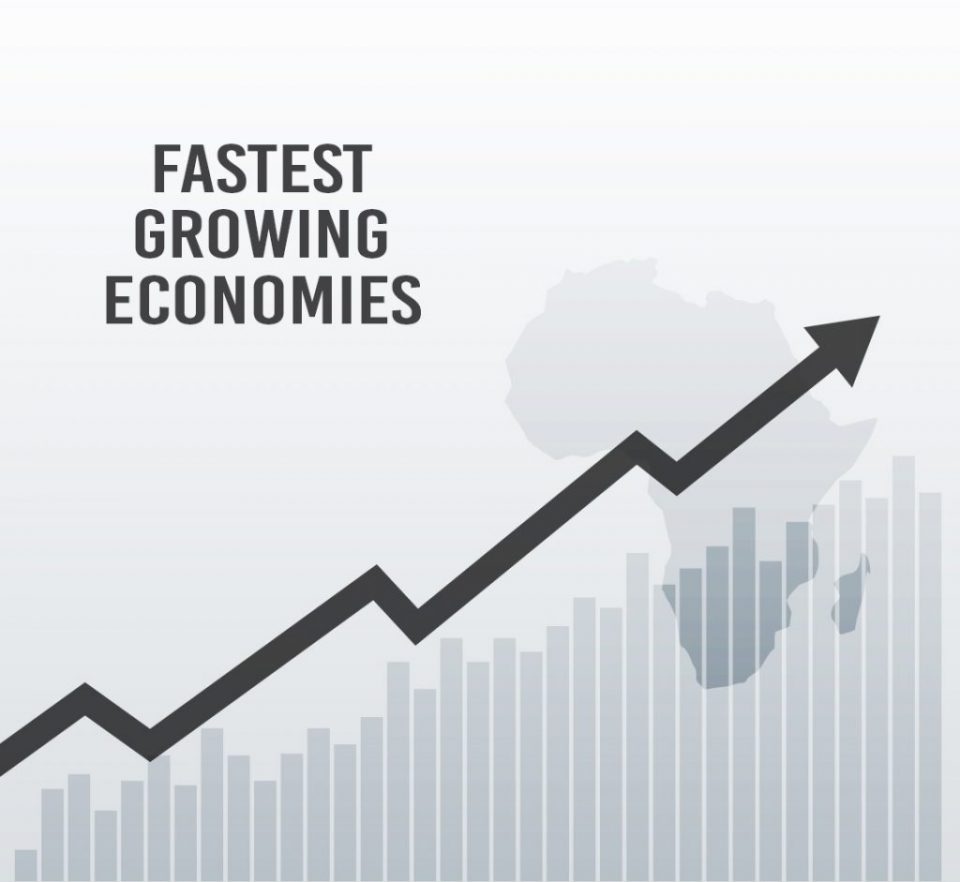 Let’s face it; Africa really has the ideal conditions for steady economic growth. A skyrocketing population made up of predominantly younger people is the perfect recipe for a booming economy.

Thus, you shouldn’t be shocked by The World Bank’s projections for the sub-Saharan Africa area. According to their 2018 projections for the continent: regional GDP growth of 3.2% (compared to 2.4% last year) is expected this year and an even greater increase of 3.5% is forecasted for 2019.

That’s why keeping an eye out for the top African countries with the fastest economic growth in 2018 is a total must for every potential investor. The abundance of natural resources and a young workforce is what has driven the economic surge on the continent in recent years.

And here’s the top 10 list of fastest growing economies in Africa 2018, starting from last:

The former French colony of Niger is located in the north-western part of the continent. It’s probably worth noting that more than 80% of Niger’s territory lies in none other than the Sahara desert. With a population of 20 million that is composed of a predominantly young population (with 49.2% aged under 15), there’s no doubt that Niger has a very strong growth potential.

According to relevant data courtesy of the Trading Economics, In the first quarter of 2018, Niger has managed to increase its gross domestic product (GDP) by 5.1% more than the same period of 2017. That’s strong growth, taking into account that the highest annual growth rate of Niger ever recorded was 13.48 and the lowest -17.06 in 1973.

The African Development Bank Group also suggests a steady economic growth for Niger, with a 2018 growth forecast of 5.4% and 5.2% in 2019. That’s mainly because of the oil and agricultural sectors, especially the latter as a direct result of the expected decent agricultural conditions such as decent amounts of rainfall.

However, the country does face certain issues when it comes to foreign investments due to the lack of proper security and nascent infrastructure. But with big players like the Hilton hotel brand investing in Niger, the future looks bright for this African country.

Benin is another African country with growth potential. The country located in the western part of the continent has a population of almost 11 million that’s mostly made of young people, with a life expectancy of 62 years.

That can explain the steady and quite decent annual growth of Benin’s gross domestic product, with a regular increase of more than 5% (5.5% in Q1 2018) for the last year. While the average GDP growth in Benin has been of 3.95%, from 1961 onwards.

In fact, agricultural production is one of the main reasons for Benin’s encouraging economic forecast. The estimated amount of cotton production in Benin for 2016 alone was 450,000 tons and that combined with the expansion of electricity production, are all helping to catapult Benin’s economic growth this year.

Just northwest of Benin lies the west-African republic of Burkina Faso. Boasting a population of almost 20 million, this densely populated country maintains a rather young age structure, with 45% of the population being younger than 15 years of age.

Perhaps that might explain the tremendous growth of its GDP (gross domestic product) on an annual term, which currently sits at an increase of 6% in Q1 2018, according to data from the Trading Economics.

That’s slightly higher than the country’s average annual growth rate of 5.78%, seen from 1991 to 2018. And while the highest yearly growth registered ever was the whopping 25.70% back in 1994, the lowest point has been -2.3% (in 1999), which means that the current steady GDP growth rate of Burkina Faso is a positive sign.

The exponential economic growth of Burkina Faso is reinforced by the country’s investment plan that’s focused on infrastructure, telecommunications, agriculture, and energy. And on top of that, the increasing prices of both cotton and gold might add to the positive economic forecast of the west-African country.

Located on the Gulf of Guinea in West Africa, Ghana has a population of 29 million of which 57% are under 25. That and the oil and gas production saw Ghana’s economy grow at a rate of 8.5% in 2017, although that rate has slowed down since.

The 2018 forecast of 6.3% economic growth, which is still quite spectacular; Ghana’s positive economic outlook can be attributed to its natural resources and most notably, the booming oil production that catapulted the country’s annual growth rate.

What’s even more interesting is that economic progress will also be achieved thanks to the new and modern hydrocarbon oil and gas wells that Ghana currently has, namely the:

Still, we’ll have to wait and see whether or not Ghana’s economy manages to rebound to it’s glorious 2016 GDP growth rates in the coming years.

Yet another African country with strong economic growth, Tanzania is located in the eastern part of the African continent. An interesting fact about this country is that it has one of the youngest populations in the world, with 28 million out of the entire 55 million population being people aged under 25.

With such a young and thriving population, it comes as no surprise that Tanzania is enjoying an average GDP growth of 6.73% (from 2002 to 2017), while the 2018 predictions point to 6.4%. It should be noted that in recent years Tanzania’s growth has hovered around the 6-7% mark, which is a testimony to this country’s efforts in areas such as:

And while the aforementioned sectors skyrocketed, others ones like agriculture, transport, and storage have a lesser output. Nonetheless, these sectors still experienced an increase of respectively 0.1% and 6.8%.

In addition to this, Tanzania’s shrinking trade deficit, thanks to an improvement in the import-export ratio is yet another factor that can help to create sustainable economic growth of this country.

Djibouti is located in the eastern part of Africa and it’s one of the smallest countries on the entire continent, both territory and population-wise. The overall population is almost 1 million, with over 37% of that number being people under the age of 15.

Unsurprisingly though, the efforts of Djibouti’s government are concentrated on several key elements, such as improving the infrastructure, most notably its ports. Apart from that, increasing employment rates and further stimulating economic growth are also part of Djibouti’s long-term strategy for a sustainable development.

The country that occupies the westernmost point in Africa (Pointe des Almadies, Dakar), Senegal has a population of 16 million. And when it comes to its demographic profile, more than 60% of the population is under 25, which is a great premise for GDP growth.

Subsequently, the 2018 forecast courtesy of the Trade Economics points out at a growth of 6.8% (compared to 7.0% in 2017). That’s still a rather spectacular rate that’ll most likely be supported even further by areas like:

These sectors saw the highest increase during last year and they’re expected to solidify Senegal’s annual economic growth. However, there’s more to the economic growth of this country, as other aspects related to its budget might help even further.

According to relevant data from the African Development Bank Group, the budget deficit of Senegal is supposed to decrease to 3% (down from 3.7% in the last year) in 2018. This is due to exports of zircon and peanuts.

The Republic of Rwanda is one of the smallest countries in the continent with a population of roughly 12 million. It’s located in the central-eastern part of Africa, bordering with 4 countries – Uganda, Congo, Burundi, and Tanzania.

But with over 50% of the population under 20 and with a median age of just 22.7, Rwanda’s over 10% economic growth in the first quarter of 2018 should come as no surprise. This reason for this increase is the growth of particular sectors like:

Ivory Coast, or officially known as the Republic of Cote d’Ivoire, is located in West Africa and borders two of the other countries in this top 10 economies in Africa 2018 list – Burkina Faso and Ghana. The population of Ivory Coast is close to 25 million with over 57% aged 24 or under.

Now, when it comes to the gross domestic product (GDP) figures, this country is undoubtedly one of the most stable countries in Africa, with its 5.17% average growth rate that covers a huge time frame – from 1961 to 2018.

And even more astoundingly, Ivory Coast has managed an incredible record rate of 17.61% from way back in 1964, while the all-time low growth was registered in 1980: -10.96%. In recent years though, Cote d’Ivoire has maintained a very strong and predictable GDP growth that logically places it among the top performing countries, not only on the continent but in the entire world.

It’s also worth mentioning that Ivory Coast is one of the biggest exporters of raw cashew nuts, coffee, palm oil, and cocoa. This, in addition to the boom in the energy sector, all help Cote d’Ivoire, establish itself as one of the fastest growing economies in 2018.

The fastest growing economy in Africa 2018 has a name, and it’s Ethiopia. Situated in eastern Africa, Ethiopia has a whopping 107-million population with 30% made up of young people.

It’s no secret that Ethiopia’s economy is booming and its economic growth has been hovering around 8-11% for over 10 years now. As for the average rate, it’s 5.85% and it ranges from 1981 to 2017, with 13.9% being the most economic growth that this country has seen, with-11.10% being the lowest rate recorded.

One of the key aspects that propel Ethiopia’s economy is its booming industry. A quick look at particular figures highlights that the industry segment of Ethiopia’s GDP skyrocketed from 16.7% to 25.6%, from 2015/2016 to 2016/2017, inspired mainly by elements such as:

In general, it’s safe to say that by utilizing adequate industrialization tactics, revolving around export, Ethiopia is able to support its incredible growth in the industrial sector.

And with an expected even further improvement in the agricultural and industrial growth, solidified by an increase in direct investments from foreign investors and a sound public infrastructure spending plan, Ethiopia’s economy shows no signs of slowing down anytime soon.

A Look Beyond Africa’s 2018 Economic Forecasts

While some of the African countries that found their place in our list are can actually be included in the 10 fastest growing economies in the world (not just on the continent) in 2018, it should be noted that the 2019 predictions are even more intriguing.

According to International Monetary Fund’s 2019 economic outlook, the best performing African countries will be:

The same data also forecasts that the sub-Saharan African region manages to achieve a GDP growth of 3.7%, ranking it at the 9th place from all regions across the world. Unsurprisingly though, Ethiopia tops all predictions when it comes to African countries and their associated economic growth in the coming year.

Being one of the fastest growing economies in 2018, Ethiopia can also enjoy yet another positive economic forecast, courtesy of Trading Economic’s 2018-2020 outlook. The expected GDP growth in the first quarter of 2019 is the whopping 10.65%, while the exports are expected to rise to 769 million for the same period.

B2B or business to business trading platforms have been enjoying a stellar reputation across the globe and it was just a matter of time until Africa got it’s very own B2B marketplace.

That’s a logical step considering the continent’s booming economy and thanks to WaystoCap’s unique B2B marketplace, trading in Africa has never been easier. The WaystoCap platform not only helps to connect buyers with sellers, but it also offers a bulletproof trading solution that:

Both small businesses and large companies can now buy and sell products in Africa with ease, in a 100% safe and secure trading environment. Our platform is the ideal way for your business to diversify its sales operation through new export and/or import options.

Choose From Dozens Of Products And Goods Or Sell Yours

Our exclusive trading system employs 4 key points as it ensures that you buy or sell only through our trusted community as we help our buyers get in touch only with the most trustworthy exports in Africa.

Now, don’t hesitate to browse through our extensive list of first-rate products to buy in a convenient and secure manner, or alternatively, you can register as a seller so that you can sell your business’ goods in a safe and reliable way!