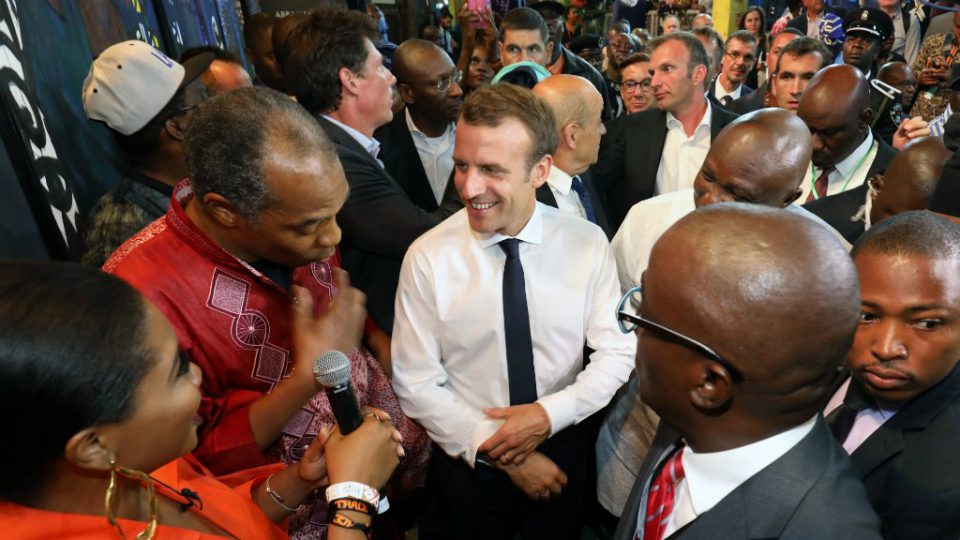 In 1977, Nigerian soldiers burned down the legendary concert hall where Fela Kuti performed his protest music that popularized the Afrobeat genre and earned him millions of loyal followers around the world.

Kuti was despised by Nigeria’s military rulers for his controversial songs that mocked corrupt officials, criticized colonialism and encouraged Nigerians to question their leaders’ lavish spending.

Kuti died in 1997, but on Tuesday July 3, 2018, the New Afrika Shrine in Lagos — which replaced the original club and is now managed by two of Kuti’s sons, Femi and Seun, also both musicians — welcomed French President Emmanuel Macron. His visit to the Shrine, believed to be a first by a sitting president, stole the spotlight from Macron’s earlier extremism-related meeting with Nigerian President Muhammadu Buhari and somewhat shifted the focus of his trip to a celebration of African youth and culture.

“It may be a surprise that a French president goes to the Shrine, but it never surprises anyone if I go to the Albert Hall or the Met,” Macron said. “We have to change that.”

At first glance, the Shrine may seem far from presidential. On an average night, hawkers linger outside and a cloud of marijuana smoke envelops guests before they even get through the front doors. Young men play pool in the corners, sharing joints next to signs that say “Drugs are not allowed in the Shrine.”

But the concert hall is also one of Lagos’s most historic landmarks, celebrating the legacy of a man who fought back against the establishment, even as he lost his own mother to the violence of Nigerian soldiers. Kuti was arrested countless times, and he spent time in prison the last time Buhari was in power, as a military ruler who took over in a 1983 coup. When complications from AIDS killed Kuti in 1997, at least a million people are said to have lined the streets of Lagos for his funeral.

While the club was once feared by many Nigerians, who associated it with an era of violence and crime, it now attracts a wide variety of guests, from hipsters in skinny jeans to older Nigerians dressed head to toe in traditional clothing.

Macron was already familiar with the venue: Long before he was elected president, he interned at the French Embassy in the capital of Abuja, and he claims to have visited the Shrine during the six months he spent in Nigeria. “I can’t tell you everything that happened when I used to come to the Shrine, because what happens at the Shrine stays at the Shrine,” he said this week.

Rikki Stein, the elder Kuti’s close friend and former manager, said in a phone call with The Washington Post that he was “over the moon” about Macron’s visit to the Shrine.

“France was the first country to really promote Fela,” Stein said. “He would have been happy to know that the president of France paid his respects.”

Tuesday’s special event featured a fashion show, musical performance and art display. On Twitter, Macron shared a video of himself sharing the stage with Femi Kuti (seen below in blue and red, holding the microphone).