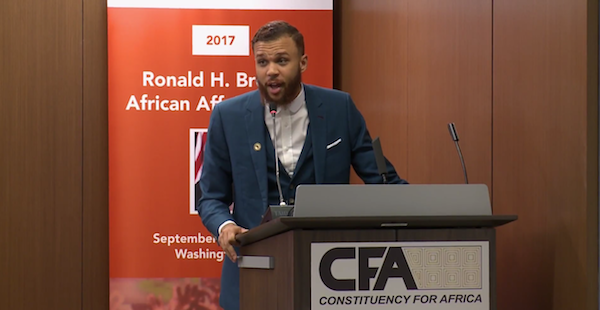 “In the quote unquote ‘dark continent’, which doesn’t have the best electrical grid, why is it that when you come back from there you’re the most electrified you ever feel?”

Jidenna grew up between Nigeria and the United States. Responding to some of the dictates typical of immigrant families, he set out to become an electrical engineer. But as he puts it “I didn’t just want to build the microphone, I wanted to use it”. Now he is a successful hip hop artist and record producer, his words electric.

Speaking at a roundtable discussion convened recently by the Constituency for Africa, to discuss the empowerment of the next generation of leaders from the diaspora, he began by highlighting three interconnected fundamentals for the continent: education, trade, and tourism.

Africa’s youth need to be educated properly so as to leap frog in to a new era. The basics are essential. Education should provide Africa’s youth with the technical skills, and encourage the drive for innovation in business and technology, that is required to build the roads, railways, ports, electrical grids, hospitals, telecommunications and other infrastructure needed to accelerate Africa’s transformation.

Meeting these infrastructure deficits will of course accelerate another crucial transformation – connectivity, and the growth of intraregional trade. As the Africa Progress Panel’s “Lights, Power, Action” report highlights, less than 8% of power is traded across borders in Africa south of the Sahara, a lack of regional integration typical of all commodities. As it stands, the value of goods traded within the European Union is roughly twice that of goods traded between the EU and non-EU countries – African countries should aim for at least this level on the continent. There is no reason why it shouldn’t, creating larger markets and synergies.

In addition, economic integration and better regional infrastructure comes hand in hand with cultural exchange. Tourism will be a key part of the picture here. Within Africa, but also with the African diaspora, African tourism must be encouraged, coming hand in hand itself with innovation and new economic opportunity. “You get an MBA magically when you go to Africa…you immediately get ideas when you go there”.

But to boost tourism, and attract investment, Africa will need to spruce up its image. And here it is Jidenna as artist and entertainer that speaks.

“When you see rappers, or artists, go to a certain place, a lot of people are following them, and wanting to go to where they went. I did certain things in my life because a rapper did it”. Forget Paris, forget Dubai, we need young children in the diaspora to say: “I want to go to Dakar when I’m older…I’m gonna save up and go to Dakar”.

But to do this “we need to make it look sexy”.

“You can’t just come out here, the way my father’s generation…and peace be with him, and shout out to you all, for doing the hard work…but he thought it was all engineering, agriculture, lawyer, doctor, that’s what he wanted me to be, and I think that’s a step…but the other step we have to take is a very simple step…its can be complex on the ground, but when we speak about it its simple, its making [Africa] look appealing and attractive to travel to. We have to move away from the stereotype of charity, and move towards investment.”

“We are still recovering from colonialism and slavery…but just keep your eyes open for opportunity, and not just see devastation if you’re going to certain parts of certain countries…focus on the areas that are stable.”

The creators of culture – artists, musicians, writers, sports stars, actors and filmmakers etc. – who have the power to paint pictures of our ideals, shaping our values, and our dreams, should be leading this revolution.

As the Africa Progress Panel Director-in-Charge, Maximilian Bankole Jarrett, has asked me: “why is it that African art, music, dance, fashion, design, sport and film are a hub for endogenous creativity, expressing a bold and authentically African voice that is respected internationally – but when we look to African politics, we see so little of that?”

Some of the creativity, inspiration and leadership typical of artists is desperately needed among Africa’s political leaders.

“Managers do things right, leaders do the right thing” Jidenna reminds us.

Africa has too many managers, and not enough leaders. Africa needs leaders who follow their principles, whilst innovating and inspiring action. Without romanticising the period, Jidenna would have us think of the independence leaders of the 50s and 60s. Lumumba, Nkrumah, Kenyatta…not perfect – but they spoke with conviction, and thought outside of the box, painting an image of a continent that was forging a new path for humanity.

In the context of this discussion, the leader from this period that comes to mind for me is the revolutionary psychiatrist Frantz Fanon. A son of the Caribbean diaspora, he moved to Africa and fought for the liberation of Algeria from French rule in the 50s, meeting with Nkrumah, and corresponding with Lumumba, as ambassador for the provisional Algerian government, speaking the language of pan-Africanism.

As a young man in a racially charged 1950s France, whilst studying to become a medical doctor, Fanon wrote a book that condemned the role that films, advertising, novels, comic books, and children’s history text-books have on our psychologies and self-understanding, reinforcing pernicious racial assumptions and phobias. An avid theatre goer, Fanon also wrote a series of plays during his medical studies, retaining a sense of the theatrical and dramatic throughout his life, contributing to his reputation as a powerful and emotive public speaker.

A passage from Fanon’s final work jumps out to me especially, touching on Jidenna’s core themes of education, infrastructure, and leadership, and raising a question about agency and foreign intervention, but also foregrounding the importance of the artist and storyteller:

“If the building of a bridge does not enrich the consciousness of those working on it, then don’t build the bridge, and let the citizens continue to swim across the river or use a ferry. The bridge must not be pitchforked or foisted upon the social landscape by a deus ex machina, but, on the contrary, must be the product of the citizens’ brains and muscles. And there is no doubt architects and engineers, foreigners for the most part, will probably be needed, but the local party leaders must see to it that the techniques seep into the desert of the citizen’s brain so that the bridge in its entirety and in every detail can be integrated, redesigned, and reappropriated. The citizen must appropriate the bridge. Then, and only then, is everything possible.”

Fanon’s use of dramatic terminology in the image of the “deus ex machina” is important. Anyone versed in the mechanics of good story telling know that the use of a deus ex machina is typically a serious faux pas as a way of concluding a plot. Fanon is thinking of Africa’s socio-economic and political transformation, what we now call “development”, as a performance.

This came out in part from his training in psychoanalysis and existentially inspired psychiatry. Real socio-economic and political transformation, to also be a psychological transformation (and the latter is in a sense a condition of the long-term possibility and success for the former) – will need to put on a damn good show. Because that’s how we find meanings our lives, how we express our hopes and dreams.

Africa needs a good story, one where it is the agent of its own transformation, where the resolution of its problems doesn’t come from an alien and esoteric god-machine from above.

We should listen to people like Jidenna, like Fanon, who recognise the real hard and concrete work that is to be done by the engineers, doctors, and lawyers to bring prosperity to the continent. Of the need for Africans to be properly educated so that they can appropriate for themselves the complexities of our rapidly changing world, becoming the agents of their own socio-economic development.

But who also understand the role of the artist as the mouthpiece, and often leader, of this very transformation. Of the importance of people who follow their moral principles no matter what, whilst thinking outside of the box. Of the people who tell stories for a living – be they visceral and sexy, or more highbrow – creating visions of the future that speak to our ability to hope and dream, spurring us to action, to transformation, and to the creation of the truly new.

Artists and other cultural innovators must work closely with the scientists, the technicians, the policy makers and the politicians, bringing imagination and emotional valence to our visions of the future. All play their role in accelerating Africa’s transformation.