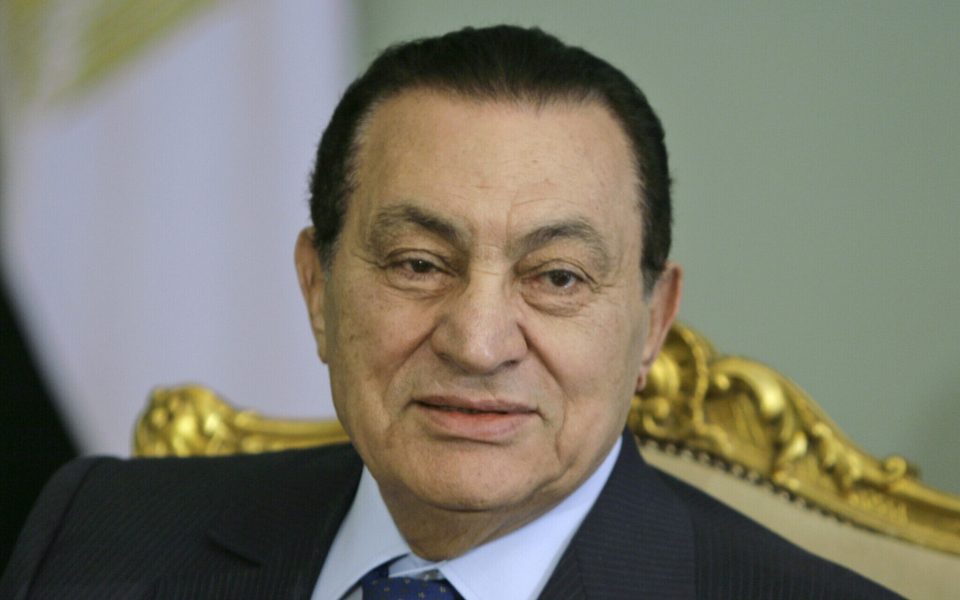 Hosni Mubarak’s first days in power could not have
been more difficult.

It was October 1981, and Mubarak had been lightly
wounded in the spray of bullets and grenade fragments that killed President
Anwar Sadat, having sat to his right on the viewing stand of a military parade
in Cairo. Without time to recuperate, Mubarak had to restore order in Egypt,
assess the scope of the rebellion in the military (Sadat’s assassins had been
uniformed soldiers active in an Islamist underground), and make a quick
decision about the future of the

Mubarak, who died Tuesday in an Egyptian military
hospital at 91, acted decisively. He declared a yearlong state of emergency
that he would renew again and again. He purged the military of opponents and
sent troops to put down an Islamist insurrection in the south. And he quickly
assured Israel and the United States that he would honor every word of the Camp
David peace agreement, a 3-year-old accord that had cost Egypt its leadership
role in the Arab world and left it deeply isolated.

For the West, certainly, it was Mubarak’s finest
hour.

For Egyptians, though, it marked the start of three
decades of tyranny and corruption, an era that ended with the Arab Spring
protests in 2011 and his dramatic ouster. Mubarak was stripped of power,
convicted as an accomplice in the killing of protesters during the 18 days that
transformed Egypt that year, and given a life sentence. His two sons were
imprisoned as well.

Between the bookends, Mubarak had a substantial
impact on Egyptians but rarely made their lives better. He deepened his
alliance with the United States, reinforcing a trend in the Arab world away
from dependence on the Soviet Union and toward a market economy, albeit a
dysfunctional one. He dealt firmly with the Muslim Brotherhood, a strategy that
blocked the group’s rise for decades but also helped power its surge after he
was deposed. Washington rewarded Mubarak with more than $60 billion in mostly
military aid over the decades for his policies but paid its own price for
supporting Arab despots—in the form of resentment from the Muslim masses.

“His major success was stability,” Amin Mubarak, a
cousin of the former president who served for years as a member of parliament
from the ruling National Democratic Party, told me in Cairo in 2012. For many
Egyptians, that just meant stable measures of hardship and unemployment. Even
now, nearly one-third of the population lives below or near the poverty
line.

Mubarak was born in 1928, the same year a band of
Egyptians established the Muslim Brotherhood. He grew up in a small town about
an hour north of Cairo but left to pursue a military career and returned for
visits only rarely, according to relatives. After graduating from Egypt’s
Military Academy, he transferred to the Air Force, learned to fly, and began
climbing the ranks.

Had Mubarak been a few years older, his rise would
likely have stalled with the humiliation of the 1967 war against Israel, a
defeat so ignoble that it ended the careers of many Arab generals.

Instead, Mubarak ascended to the position of Air
Force chief just in time for the 1973 war, which Arabs celebrate as a victory.
(Arab armies surprised Israel and inflicted heavy casualties but ultimately
failed to capture territory.) Though Mubarak’s record in the war is disputed,
Sadat hailed him as a hero and eventually appointed him vice president. It was
the eighth anniversary of the ’73 war that the two men were marking at the
parade when Sadat was assassinated.

Mubarak was 53 when he was sworn in, flanked by his
half-British wife, Suzanne, and his two sons, Alaa and Gamal—all three of whom
would play a role in his demise decades later. Within nine years, he managed to
restore ties with most Arab countries, relations that had been severed over
Egypt’s peace treaty with Israel. He also restored Egypt to its position as
leader of the Arab world; Cairo once again became the seat of the Arab League.