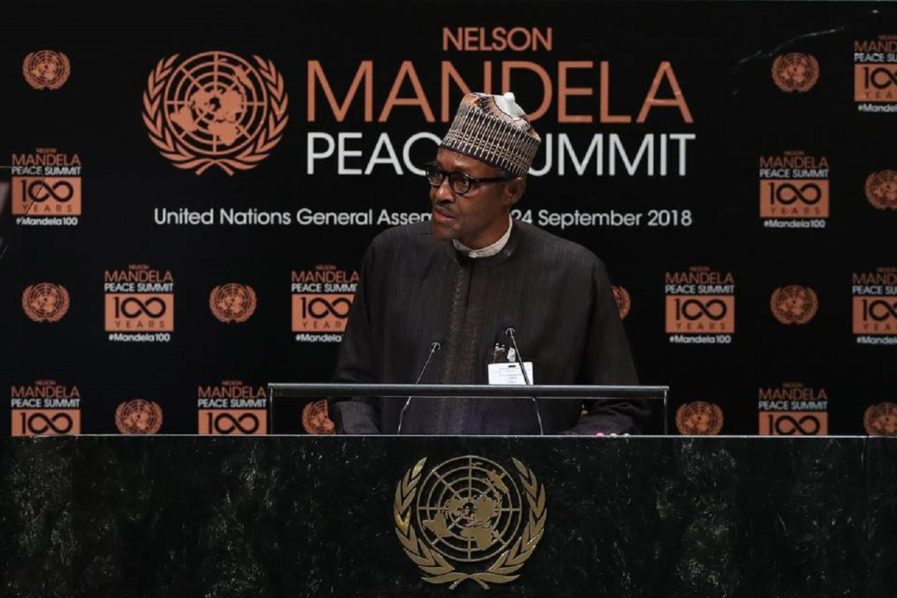 President Muhammadu Buhari of Nigeria has urged world leaders to emulate the values of former South African President, Nelson Mandela, by placing human dignity at the centre of their actions and activities.

According to President Buhari, doing so will help provide and sustain a just, peaceful, prosperous and all inclusive world.

He made the call while speaking during the Nelson Mandela Peace Summit, on the sidelines of the ongoing 73rd United Nations General Assembly UNGA in New York.

He said the Centenary celebration of the anti-apartheid icon was an opportunity for the leaders of various countries to rededicate themselves to the service of humanity by championing democracy, conflict resolution, disarmament, mutual respect, reconciliation, gender equality and the fight against poverty.

The Nigerian leader observed that “even though the world is facing diverse challenges ranging from conflicts, climate change, terrorism, desertification, poverty, arms trafficking and extremism among others, it is a time of great hope and renaissance if inspiration is drawn from Mandela, whose lifestyle symbolized uncommon humility, compassion, courage and forgiveness.”

Quoting a statement that Mandela made during his trial where he was faced with the death penalty, President said: “During my life time, I have dedicated myself to this struggle of African people. I have fought against white domination and I have fought against black domination. I have cherished the ideals of a democratic and free society in which all persons live together in harmony with equal opportunity. It is an ideal which I hope to live for and see realized. But if need be, it is an ideal for which I am prepared to die.”

President Buhari further said: “It is within this ethos of the great Mandela that we place this declaration. We must therefore make concerted efforts to build a just, peaceful, prosperous and inclusive and fair world and revert to the values for which Nelson Mandela stood by placing human dignity at the centre of our action.”

President Buhari noted that the Centenary Celebration provided an avenue to reflect on the legacies of Mandela and his unwavering advocacy for human rights, social justice and peace.

“It also affords us a rare privilege to rededicate ourselves to the service of humanity by championing democracy, conflict resolution, disarmament, mutual respect, reconciliation, gender equality and the fight against poverty. There is no doubt that in quest to attain peace and development, the world will draw inspiration from the likes of Nelson Mandela,” he said.

He also stated that by the declaration, the world recognizes the contribution of women to advancement of society and their contribution to the prevention and resolution of conflicts, saying that Nigeria is committed to the promotion and protection of the rights of all women as well as providing an enabling environment for them to realize their full potentials.

“We also recognize that inherent dignity and equal and inalienable rights of all peoples of the world is the foundation of freedom, justice and peace in the world. We declare that racism, racial discrimination, xenophobia and related intolerance present the very opposite of the noble purpose of the United Nations.

“We recognize that tolerance of cultural, ethnic, racial, religious diversities is essential for lasting peace, understanding and friendship among peoples, nations, cultures and individuals. As Mandela passes into history, we stand with him in his aspiration for a better world. It is our duty to live up to his indelible legacy by collectively holding ourselves accountable to the values and principles and hope for this declaration by striving for a just, peaceful, prosperous, democratic, fair and inclusive world,” President Buhari affirmed.

The political declaration that was unanimously adopted on Monday by the nearly 100 Heads of State and Government, Ministers, Member States and representatives of civil society committed to redoubling efforts to build a just, peaceful, prosperous, inclusive, and fair world, as they paid tribute to the late South African President’s celebrated qualities and service to humanity.