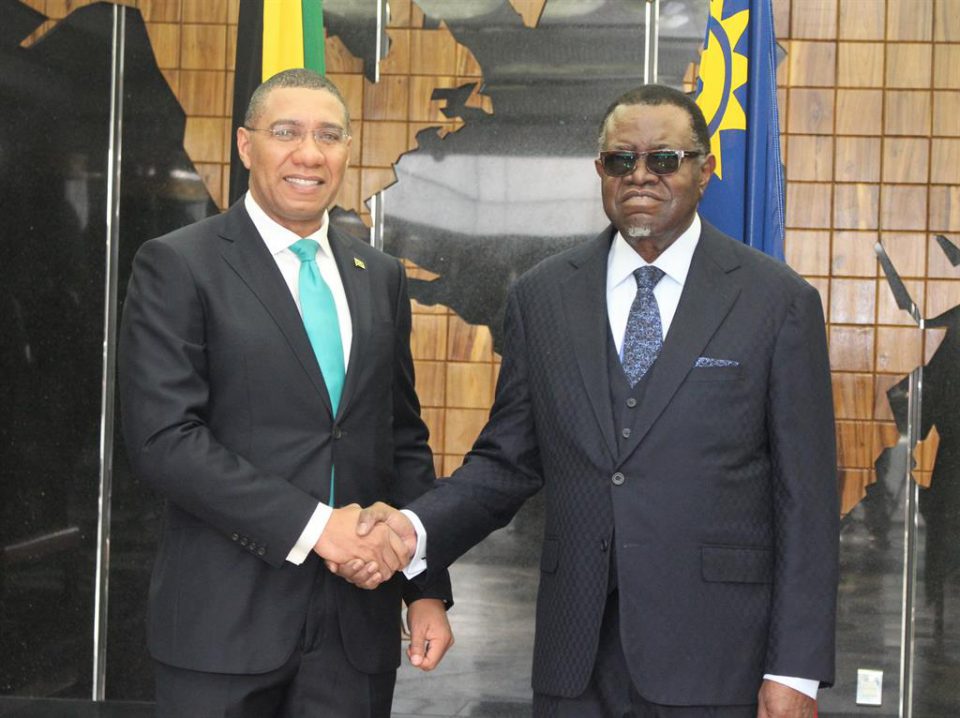 JAMAICANS travelling to the Republic of Namibia for business or tourism will not be required to obtain a visa.

The Governments of Jamaica and Namibia recently agreed to a visa waiver programme, a release from the Office of the Prime Minister (OPM) said.

It’s the first of several agreements between both countries, as Prime Minister Andrew Holness began a full day of discussions with the Namibian President HE Dr Hage Geingob.

The OPM said previously, Jamaica unilaterally waived visa requirements for Namibians entering the country as an expression of solidarity and support during Namibia’s liberation struggle. Namibia today reciprocated this action.

Speaking at a joint press conference with President Geingob in the Namibian capital Windhoek, Prime Minister Holness said both countries have now cemented a deeper bond.

Prime Minister Holness declared that his official visit to Namibia is of strategic importance.

“You know we have two beautiful countries, but we scarcely ever get to enjoy the beauty of our countries. We need to encourage travel between our two countries for tourism. I’ve welcomed the announcement by your president of the waiver of visa requirements for Jamaicans. Jamaica had long ago abolished visa requirements for Namibians,” stated Prime Minister Holness.

Jamaica and Namibia, according to OPM, are also working to secure a stronger relationship in several areas including trade, investment, banking, sports, and culture.

In addition, Prime Minister Holness stated that there will be greater opportunities for the people of both countries.

“I think that there is great opportunity for us to continue our exchange of people. We can build a strong human capital base in education. We welcome Namibians to study at our universities. We welcome Namibians to come and train with us in athletics and sporting endeavours. We believe that there can be significant opportunities between our two countries for trade,” said Prime Minister Holness.

In the meantime, Prime Minister Holness and President Geingob have recommitted to ensuring the African Caribbean and Pacific (ACP) group remains.

“I also welcome the public support of your president to ensure that the African Caribbean and Pacific arrangement remains intact,” said Prime Minister Holness.

Noting that there are some countries who feel it better to negotiate with Europe bilaterally, Prime Minister Holness believes that Jamaica and Namibia can also be efficacious in that regard.

“We are stronger together and the liberation struggle may have ended for many Africans but the new struggle is now for our economic independence and our economic liberation and it makes no sense for us to separate on this matter,” argued Prime Minister Holness.

The prime minister is slated for a series of Government and cultural activities in Namibia for the remainder of his working visit.