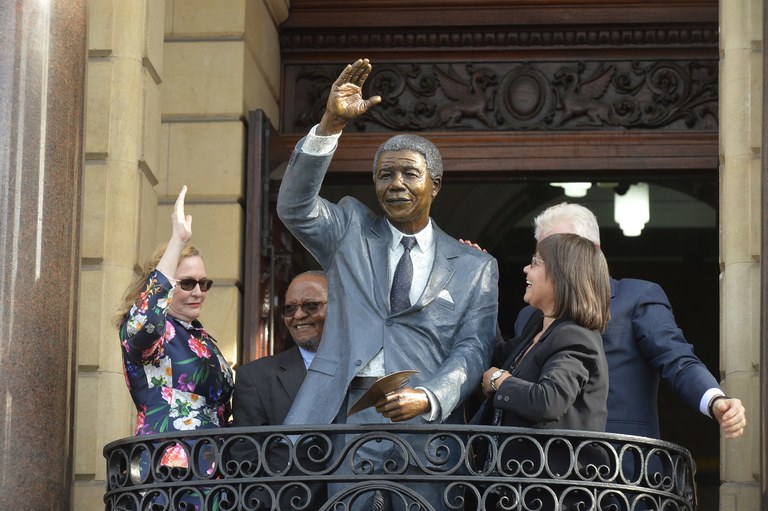 Marking the 100th anniversary of his birth, the statue is located where Mandela delivered his iconic 1990 speech following his release from prison.

This year marks the 100th anniversary of the birth of Nelson Mandela. Among all the commemorations of the man everybody affectionately called “Madiba” is a new statue in Cape Town, unveiling today. Fittingly, it’s on the balcony of Cape Town’s city hall, where thousands gathered to hear Mandela’s speech in 1990 just after the anti-apartheid activist’s release from prison, where he spent 27 years after an arrest for conspiring to overthrow the state.

“When they look up, I think they’re going to remember that moment,” says Barry Jackson, who was commissioned with Xhanti Mpakama to create the nearly life-size bronze statue of Mandela, “because everyone remembers where they were when he made that speech.” This is the third project the two South African artists have collaborated on. They also worked together in 2014 on Mandela’s bust, which resides in front of the National Assembly at South African Parliament in Cape Town; and “The Long March to Freedom,” a series of 100 statues honoring heroes and icons that includes one of Mandela. For that project, eight different foundries across South Africa were tapped.

In the new Cape Town statue, Mandela’s hand is raised in a wave, famously depicted in photos from his speech. The statue also features the gray suit and printed tie Mandela wore. In one hand, he holds the text of that speech, as well as a pair of glasses. As some might recall, these were borrowed from his then-wife, Winnie Mandela, because—in the flurry of excitement at finally being a free man—he’d forgotten his in the car.

Coinciding with the bronze statue’s reveal is a new permanent exhibit at city hall chronicling Mandela’s life in Cape Town. Both the city of Cape Town and Western Cape Government are establishing a route of sites to follow in Mandela’s footsteps, including the house he lived in at Drakenstein Correctional Centre (formerly Victor Vester Prison). This statue would be along that route.

Jackson and Mpakama were deeply inspired by Mandela’s legacy while working on the statue. “Something I read somewhere in Madiba’s writings was this idea that if you think you’re right, and you think the other guy’s wrong, put yourself in his shoes and look at it the other way,” says Jackson. “Sometimes you’re both right, or you’re both wrong, and I thought that’s a good way to look at things and I’ve carried that with me through a lot of my day-to-day life.”

For Mpakama, the project was a true honor. “To do a work like this, I do it with joy because the guy is as great as he is,” he says. “His leadership, his resilience, the kind of person he was, who was ready to suffer for what he wanted inspires me. I am hoping the sculpture will be a constant reminder of the man Mandela was.”