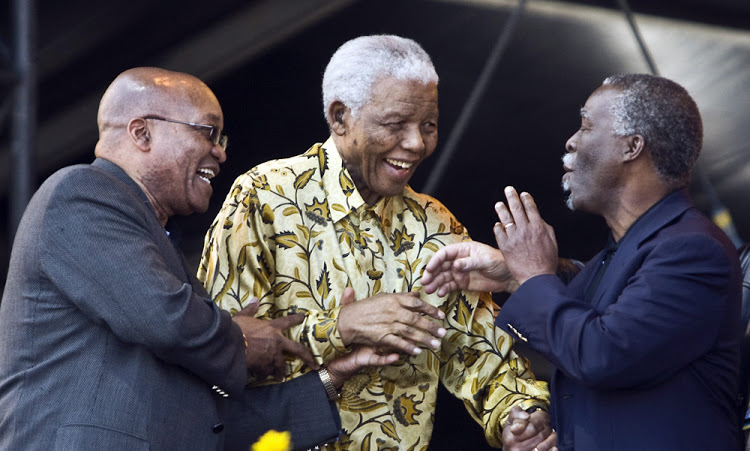 President Cyril Ramaphosa has been bestowed a heavy and not particularly fair burden in carrying the hopes of a nation.

With the recent centenary celebrations of the life and legacy of Nelson Mandela in 2018, and a recently elected president who must provide leadership to a somewhat damaged SA, it is apt to reflect on and learn from the leadership lessons SA experienced from the top, since 1994.

The inauguration of President Cyril Ramaphosa as new president was filled with much expectation and hope that things are about to change. He became the projected target of a whole nation’s hopes to rebuild a heritage of dysfunction and to do so quickly and with authority. The leadership expectations bestowed on Ramaphosa are perhaps not fair and too much to carry for one person, but it was similarly unfair on Madiba after his inauguration as president.

RAMAPHOSA CANNOT, AND CANNOT BE EXPECTED, TO BE PERFECT; BUT HE MUST INSTIL HOPE

Although we should not project idealisations of a new messiah on Ramaphosa, we can rightly ask “quo vadis” Mr President? However, it appears as if Ramaphosa had gone underground.

Ramaphosa is a typical coalitional leader, a renowned strategist and negotiator who allegedly is working behind the scenes to build new alliances and a long-term strategy from which to rally new energy into SA’s development. A certain amount of restraint and coalition building in a leader is always good; one needs time to gain understanding and build a strong foundation. We saw restraint in Madiba when he was released from prison; we did not see it from Jacob Zuma. With the apparent split support between Zuma and Ramaphosa, failing to build a guiding coalition is likely to derail Ramaphosa’s best attempts. But too much restraint for too long becomes paralysing.

Ramaphosa inherited a reality in which there are too many suffering people and urgent aspects to address to have the freedom of being over-cautious and exercise indefinite restraint. The nation urgently anticipates active and visible transformational servant leadership. We desperately need a leader who will not only bring people together, but is also willing to make the difficult and often unpopular decisions to rebuild the country and re-set it on an ethical course. It is commendable to make personal connections on the promenade in Seapoint, but Ramaphosa has to connect with the larger nation. Why do we hear our leader’s concerns about South Sudan, but not much about his concerns about the escalating crime, corruption, and poverty locally?

SA has a need to see active leadership, the courage and integrity to actively set an example in fighting corruption and to condemn the blatant racism from some political parties. The nation yearns for a leader with the political will to publicly condemn the gratuitous violence that accompanies protests and actively works to resolve the lack of delivery issues that lead to these protests. To fulfil this almost impossible leadership role, Ramaphosa will do well to learn what to do and what not to do from 24 years’ of Madiba, Thabo Mbeki, and Zuma’s leadership lessons, to become the much needed transformational servant leader.

Madiba is widely viewed as the father of the nation and the new SA. At the risk of sanctifying Madiba, there is much that Ramaphosa can learn from his leadership style and approach, as well as that of Thabo Mbeki and Zuma after him. Madiba was one of those rare leaders who never aimed to become a leader because of his own aspirations or ego, but stepped into the leadership role because there was a job to be done. It is thus not surprising that Madiba was the quintessential servant leader; a servant to all the peoples of his beloved rainbow nation, transcending self-interest even when he had to make huge personal sacrifices.

Madiba inspired trust by being a man of integrity and was therefore trustworthy. His courage and resilience carried him through many years of deprivation, giving him the mental and moral strength to persevere, to achieve, and to serve the renewedSA for which he cared for so deeply.

Having had the courage to stand up for what was right and what needed to be done made him a powerful transformational leader. He was not afraid to put his political career at risk to do the right thing, even when he had to make unpopular decisions. He made huge strides to build a unified nation at a time when emotions were at their highest and tension was at a breaking point. He had the unique ability to read the situation and to do the right thing in the moment, but still combined within a longer term view and big picture thinking.

One of the reasons why Madiba could bring about significant change is because he was always full of hope. He never gave into despair, even when he was in prison, but connected emotionally with others and inspired hope also in them. In times of difficulty, people look at their leaders as symbols of hope.

Then there was President Thabo Mbeki, the intellectual leader who could not connect emotionally with the nation. Mbeki drove the African renaissance tirelessly and with great vision, but spurred and enacted very little renaissance and nation building in SA. Obstinately not listening to others coupled with his stubborn denial of AIDS and its devastating effects, caused him to let his people down. With the glaring absence of both servant and transformational leadership characteristics, it is not surprising that Mbeki’s legacy has been eclipsed almost totally by the Zuma era.

Zuma’s charisma hurled him to power in 2009. Being a person of humble beginnings, who understood people and how to make connections, Zuma’s supporters saw his personal touch as a refreshing contrast. Zuma’s charisma offered so much potential to make a hugely positive contribution to the rebuilding of SA. Charisma is a fire that can ignite followers’ energy and commitment. Applied wisely and ethically, it can lift an entire nation’s level of energy and performance. But like any fire, it is dangerous when out of control.

From an apparent lack of a moral compass and unwillingness to listen to wise advisors, Zuma’s presidency reeked of toxic leadership: destructive, hypocritical, and deceptive, putting his own needs first at the expense of his followers, without considering long-term ramifications to the country. Combined with a lack of moral courage, this allowed greed and self-interest to overcome concern for the common good.

From an apparent lack of a moral compass and unwillingness to listen to wise advisors, Zuma’s presidency reeked of toxic leadership: destructive, hypocritical, and deceptive, putting his own needs first at the expense of his followers

Blinded by awe of Zuma’s charisma, his followers allowed him for several years to continue on a journey of abusing his position, creating further division among people and leaving the country in a worse condition than before. Regrettably, he showed no evidence of self-insight, even after being found guilty by the Constitutional Court of not fulfilling his oath as president. Up to today, there is neither any indication of personal insight in his deeds, nor acceptance of any responsibility for its destructive outcomes.

Ramaphosa does not have to be perfect and cannot be expected to fix everything immediately, but SA is starving for signs of courageous leadership and progress in the right direction. It is not about becoming another Madiba; but SA does need hope, Ramaphosa. Embody the leadership lessons from Madiba, Mbeki, and Zuma. You may take small steps, but you have to courageously become a visible instrument of change to assist the restoration of our country.