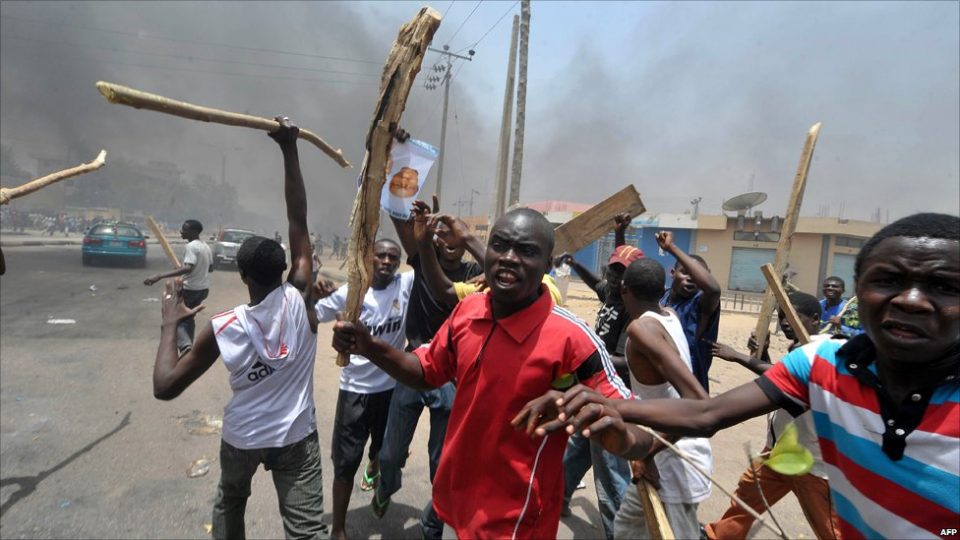 Despite the general impression that the presidential and National Assembly election in Nigeria on Saturday was peaceful, there were several cases of violence and deaths across the country.

For instance, in Lagos, voting was disrupted in some polling units in Okota, a suburb of Lagos with electoral materials destroyed in at least one unit in the area.

According to the reports, some suspected hoodlums believed to be loyal to political parties involved in the polls disrupted the election before the police intervened.

The report said that a team of policemen were seen shooting into the air and arresting some persons suspected to be involved in the destruction of electoral materials, including setting fire on ballot papers.

One of the hoodlums was killed during the incident.

In another incident, a shootout occurred in Ibadan South East Local Government Area of Oyo State, where one person was killed and two others injured.

The incident occurred at Ward 2, Units 13 and 14 in Lako compound at around 3.30pm on Saturday. The Commissioner of Police in the state, Mr. Shina Olukolu, confirmed the violence to journalists.

According to an eyewitness account, the hoodlums showed up while officials of the Independent National Electoral Commission (INEC) were counting the votes and began to shoot sporadically before carting away the ballot papers.

The incident took place at Amope in Sapele Local Government Area of Delta State on Saturday during accreditation and voting at some polling units.

According to local media reports, the suspected hoodlums emerged from an unknown place and started shooting sporadically to scare away voters and election officers and agents.

As they released a volley of gunshots on some units on old Eku Road, Amope, two voters died instantly and one other person died at the hospital where he was rushed to.

In Rivers State, the Nigerian Army killed six persons during the election on Saturday. The army said in a statement that its troops of 6 Division killed six political thugs in Rivers State during the presidential and National Assembly elections because they attacked the troops.

The army spokesman, Col. Sagir Musa, explained on Saturday that the “pre-planned attack occurred in between Charles and Bob-Manuel’s compounds in Abonnema Town at about 1:00pm on the 23rd February 2019.”

It said preliminary investigation showed that the attack on the troops by the armed political thugs, was masterminded by  “one Roland Sekibo, – the Chairman Akuku Toru LGA, Omodo – the CSO Akuku Toru LGA and Kenneth of Kula currently at large were the masterminds of the unexpected/ unprovoked attack.”

Meanwhile, the INEC Commissioner and Chairman of its Information and Voter Education Committee, Mr. Festus Okoye, has confirmed that it would reschedule elections in some parts of Rivers, Anambra and Lagos states where there were cases of violence and ballot box snatching.

Okoye, who gave an update on the elections on Saturday in Abuja, acknowledged the challenges posed by the smart card readers, but said they had been resolved.

He explained that where the malfunctioning of smart card readers was not resolved before the closing of elections on Saturday, voting would continue on Sunday.