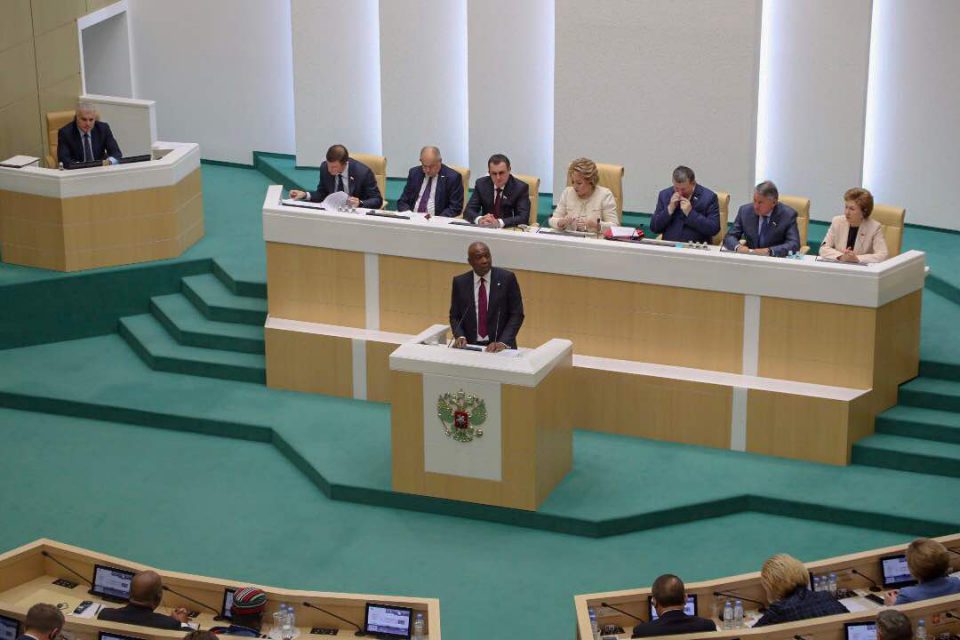 President of the Nigerian Senate, Dr. Abubakar Bukola Saraki, recently, addressed the Federal Assembly of the Russian Federation in Moscow.

Saraki arrived Russia on Tuesday 19 July, alongside other Nigerian lawmakers, at the invitation of the Chairperson of the Federation Council, Valentina Matviyenko and was received by the Nigerian Ambassador to Russia, Prof. Steve Ugba in Moscow.

The three-day parliamentary visit to Russia, according to a statement by Special Assistant to Saraki on New Media, Olu Onemola, is “aimed at deepening legislative best practices and further strengthening the relationship between both countries”.

Addressing the Russian Parliament Wednesday morning, Saraki talked about the strength and entrepreneurial spirit of Nigeria youth, especially in the areas of sports, arts and entertainment, while beckoning on Russia to invest in Nigeria.

The following are 10 notable points of Saraki’s address Wednesday morning.

“It is wonderful to be back in your beautiful country, especially during the World Cup, and for this, I wish to congratulate the Russian people for the successful hosting of the 2018 World Cup tournament.

“The burst of colour, spectacle and sportsmanship on display – as well as the smooth running of the event, are a reflection of the level of planning, preparation and capacity on your part as host nation. It is a vibrant symbol of global unity that serves as a most fortuitous backdrop to our visit.”

THE INVITATION BY THE CHAIRPERSON OF THE FEDERATION COUNCIL

“My first visit to Russia was in October last year, to attend the IPU General Assembly where I met Valentina Matviyenko, Chairperson of the Federation Council.

“She graciously extended an invitation to me to visit the Russian Parliament. We are here today in this hallowed chamber as guests of Madam Speaker and this honourable House, in fulfilment of that promise.

“I thank you most sincerely, Madam Speaker, for this kind gesture. I have every confidence that this will mark the beginning of a new phase of inter-parliamentary cooperation between our two nations, as well as a springboard for renewed vigour in Nigeria-Russia relations in general.”

AFRICA, NIGERIA HAVING STRENGTH IN ITS NUMBERS

“Africa is looking to the future, and Nigeria is at the forefront of that push. Africa is the future… More than half of the countries with the highest annual growth rate are on our continent, and this has been the case since the Year 2000…

“Furthermore, a massive demographic dividend is expected to deliver an unprecedented advantage by 2050, when our continent will account for 40 percent of the world’s population — and one in four persons on earth will be African.”

THE POWER AND INNOVATION OF NIGERIA’S YOUNG PEOPLE

“We are the youngest continent, with a population of 1.3 billion Africans, whose numbers are set to double by 2050; and more than half of whom are young people.

“The number of African youth expected to reach working age by 2035 will exceed that of the rest of the entire world combined.

“Nowhere is the surging power of Africa’s youth more inescapable than in Nigeria. Ours is the most populous country on the youngest continent, with some 68 percent of the Nigerian population between 18 to 35 years of age. This youth demographic is transforming every sphere of life in our country, especially with regard to entrepreneurship, sports, arts and entertainment.”

NIGERIA, THE ‘GATEWAY’ TO AFRICA

“The recalibration of the world and the various power blocs is happening right before our eyes. In the emerging global order, world powers are looking to Africa, and it is not difficult to see why. Africa is not merely rising; Africa is here. There is a world of opportunities on the continent. The 54 nations of Africa represent a huge geographical bloc with enormous potential for investment and strategic partnerships that will benefit only those that venture.”

WHY RUSSIA MUST RECKON WITH NIGERIA

“Our position, therefore, is simple: those who are serious about expanding their interests in Africa must necessarily see Nigeria – the powerhouse in the region – as the gateway to the continent.

“Russia should reckon with Nigeria as the central area of focus in Africa, and take a more serious view of its longstanding ties to our end of the world.”

SIMILARITIES BETWEEN RUSSIA AND NIGERIA

“Our two countries share certain, striking similarities. Our two nations are among the 10 most populous countries in the world; and are among the Top 10 in gas reserves.

“With a population of nearly 190 million people, Nigeria is set to surpass the United States of America as the third most populous country in the world by 2050.

“In terms of diversity, Russia at 190 ethnic groupings is not too far behind Nigeria’s 250… With Russia and Nigeria projected to be the biggest economies in Europe and Africa respectively in just three decades from now, it would be a travesty if we did not strive to strengthen cooperation and partnership to reap the gains in terms of GDP growth.”

“Ours is the second largest film industry in the world; and contemporary Nigerian music has gone global. I would not be surprised if Nigerian stars like Timaya, WizKid, Davido or Tiwa Savage are selling out concert halls in Moscow or St. Petersburg very soon, as they have been doing in major cities around the world.”

THE SUPER EAGLES
“In sports, well, please allow me to say humbly, that it will be difficult to take your eyes off Nigeria during the ongoing World Cup tournament.

“If anything, we have already won the battle of the football jerseys; the Super Eagles kit is an instant classic, a coveted collector’s item, universally acclaimed as the best national kit in Russia 2018.

“Naturally, the entire Nigerian nation is behind our team, optimistic for a sterling performance in the rest of the tournament and confident that our boys will now produce the sleek moves to match the sleek looks.”

“Fellow parliamentarians, there are many other issues that call for closer cooperation between our two countries – which contribute to sustainable peace in the larger world – and these include, Terrorism and Human Trafficking.

“For one, Russia is currently one of the destinations where young Nigerians are trafficked for sexual exploitation. This is a worrying phenomenon for both our countries, and we should develop common strategies for tackling the problem… we look to Russia to join us in building stronger collaboration for the fight against this common enemy.

“Terrorism, most significantly in the shape of the Boko Haram sect, has continued to pose a serious challenge to the internal security of Nigeria. When, at the height of the crisis, we were having difficulty obtaining international support, Russia memorably saved the day by supplying military equipment and assisting us with the training of personnel. We are grateful that you did not abandon us in our hour of need. While Boko Haram is largely decimated now, the threat remains, and new terrorism challenges are arising…”