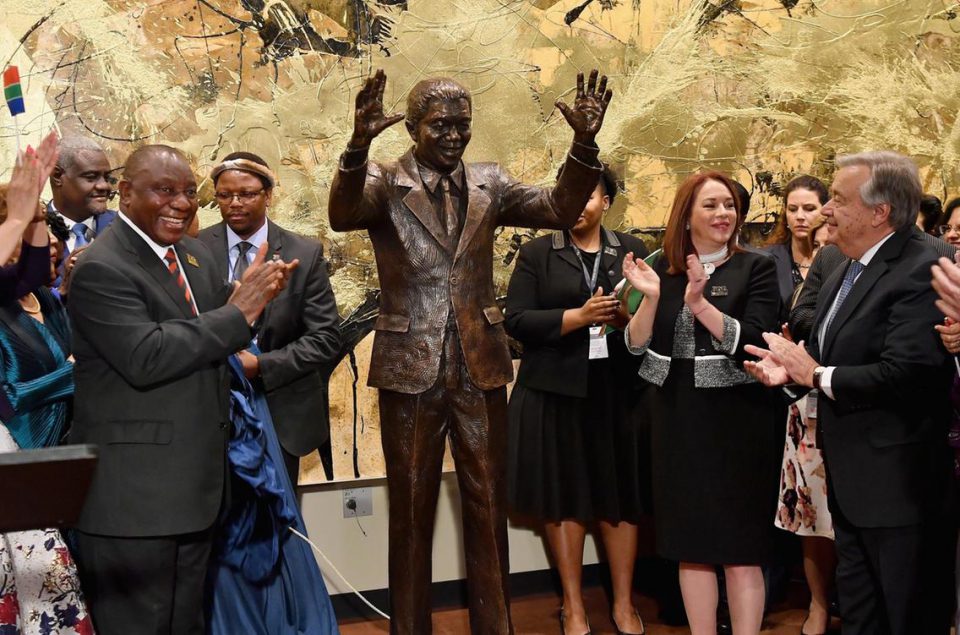 A life-size statue of the late former president Nelson Mandela has been unveiled at the United Nations (UN) headquarters in New York in the US.

According to the Presidency‚ it is the only life-size statue to have been erected at the UN.“ At 1.9 metres tall‚ the Nelson Mandela Statue is the only life-size statue at the United Nations headquarters‚ signifying the role he played in unifying the world under the banner of peace and conflict resolution‚” the Presidency said. The statue was created by Andre Prinsloo and Andre Otto. Prinsloo‚ along with Ruhan Janse van Vuuren‚ also worked on the nine-metre bronze Mandela statue that towers over the gardens at the Union Buildings in Tshwane.

The statue is fitted with former President Nelson Mandela’s prison shoes that he wore during his days as political prisoner 46664 on Robben Island in Cape Town, where he served a jail term of 27 years.

The presidency said particular statue was relevant to the UN.

“The statue is modelled after the day Nelson Mandela delivered his first speech to the United Nations Special Committee on Apartheid on June 22, 1990.He urged the United Nations to maintain sanctions against South Africa until apartied was abolished,” it said.

Ramaphosa and a government delegation are in the US for the 73rd session of the United Nations General. They will also take part in what has been dubbed the Nelson Mandela Peace Summit, a high-level plenary meeting convened by the president of the General Assembly, Maria Espinosa, in honour of the centenary of the birth of South Africa’s first democratically elected President