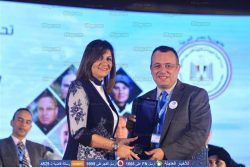 A Georgia Southern University assistant professor of electrical engineering was honoured by the Egyptian government at a conference in Luxor recently.

Assistant professor, Adel El-Shahat Ph.D., was honored at the “Egypt Can 3…with the Sons of the Nile,” conference. 21 scientists who have made achievements in fields, including water shortage, agriculture, and alternative energy were invited by the Egyptian government.

El-Shahat is the founder and director of the the Innovative Power Electronics and Nano-Grids Research Lab.

The conference hopes to continue to keep connections with these expatriate scientists in order to continue to build Egypt and to find solutions for the water shortage crisis and power problems that exist in the country.

Egypt’s Immigration minister Nabila Markam presented the award to each of the 21 expatriate scientists.

El-Shahat spoke about how he was honoured to receive the award.

“First, I felt [the] deepest thanks and appreciation to Georgia Southern University and the College of Engineering & Computing, as well as the United States for their kindness and support to make any achievements in my life,” El-Shahat said. “Then, I felt happy to be honored from Egypt, which I [was] born and grown-up there. Because Egypt is my roots, with its ancient Egyptian civilization, and United States is my future, as the land of science, as well as, the current and future great leading civilization.

Dr. El-Shahat finds that Albert Einstein has inspired him in his work and teachings.

“Regarding my teaching, I completely believe in the great Albert Einstein’s quote: ‘If you can’t explain it simply, you don’t understand it well enough.'”