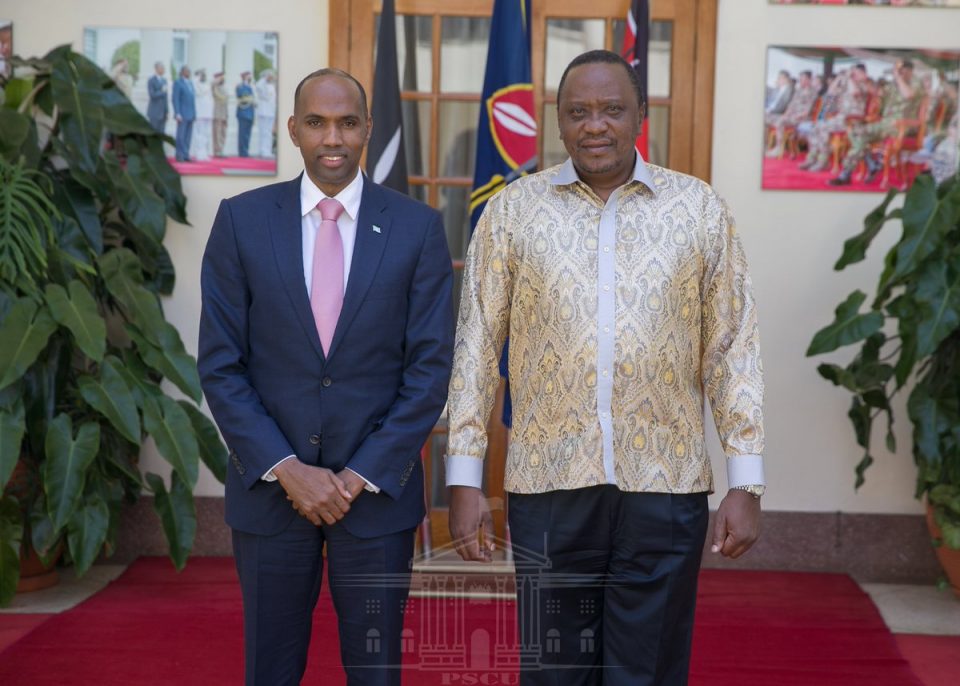 Somali Prime Minister Hassan Ali Khaire has thanked Kenya for being Somalia’s number one strategic partner in the ongoing transformation of the Horn of Africa country.

Prime Minister Khaire said the strong partnership between the two countries is good for the stability and progress of the East African region.

The Prime Minister spoke on Tuesday at State House, Nairobi, when he delivered a goodwill and condolence message to President Uhuru Kenyatta from President Mohammed Abdullahi Mohamed of Somalia following the recent terrorist attack at Riverside Drive.

The PM said his country appreciates the key role played by Kenya in the stabilization and reconstruction of their nation, further commending President Kenyatta for being a true champion of Somalia’s transformation.

“Your Excellency, you are our champion in the transformation of Somalia and we request you to continue leading in the efforts of reconstructing our nation,” said PM Khaire.

The Prime Minister assured President Kenyatta that Somalia stands in solidarity with Kenya in the fight against terrorism and violent extremism.

He said the terror attack at the DusitD2 complex has only strengthened the resolve for the two countries to defeat terrorism and violent extremism.

The Premier congratulated Kenya’s security agents for the swift and professional action that saved lives of many Kenyans and visitors.

He said Somalia is on the positive trajectory as it strives to build on the gains made in securing the nation by the AMISON forces by coming up with a new constitution, getting new currency as well as building strong security institutions which are key to both economic and social stability of the country.

The Prime Minister said Somalia currently hosts over 50,000 Kenyans working in various sectors of the economy, adding that the country has improved its purchasing power and the investment environment through various development programmes.

He said the reconstruction of Somalia has seen its education, health and other community development programmes taking off, giving the country opportunity to negotiate with international lenders such as the World Bank and the International Monetary Fund.

“The reconstruction of the country and the ongoing programmes in economic development will help us reduce poverty and greatly contribute to our efforts to combat terrorism and violent extremism,” the Prime Minister said.

President Kenyatta thanked the Somali leadership for their support and solidarity following the Riverside attack and their commitment to continue working with Kenya in the fight against terrorism.

The President expressed his delight to learn that Somalia is on the positive trajectory, economically, socially and in its relations with global partners.

“This is proof that Kenya’s efforts have not gone to waste,” said the President.

President Kenyatta assured the Somali Prime Minister that Kenya will continue to support international efforts to stabilize and reconstruct Somalia.