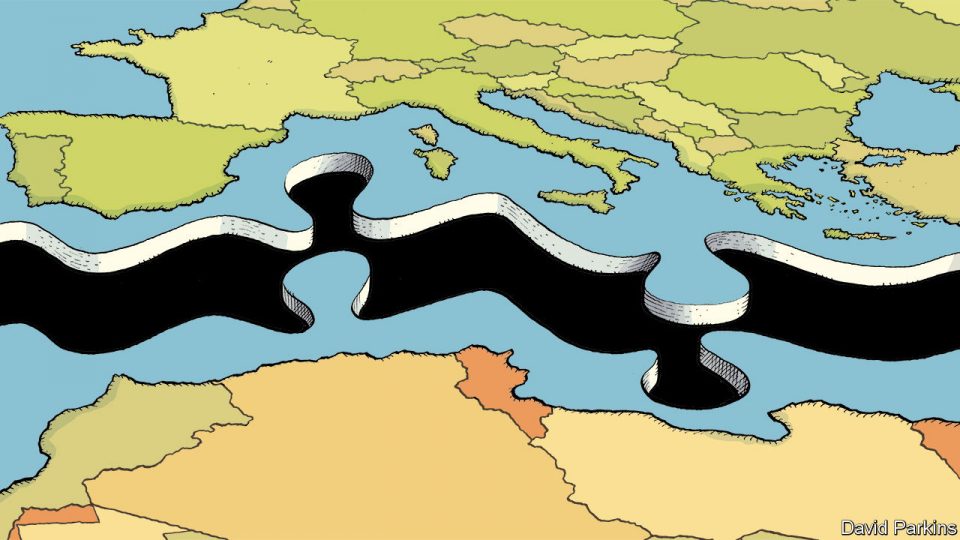 IT IS a peculiarly modern habit to think of the Mediterranean Sea as a boundary. For over two millennia, civilizations bled across it and intermingled. Roman, Carthaginian, Moorish and Venetian empires expanded primarily along maritime routes. It took four days to get from imperial Rome to today’s Tunisia, but 11 days to reach Milan. The Sahara restricted contact between this Mediterranean Eurafrica and the regions to the south, but not entirely. A study of 22 skulls from Roman London found that four were African, for example. The medieval wealth of desert trading cities like Timbuktu and Agadez spoke of extensive north-south commerce. Later European colonialists penetrated, pillaged and parceled up the continent; African troops fought in the trenches of the First World War; Europeans fought in Africa in the second.

Three subsequent events curbed this trans-Mediterraneanism. European powers left Africa with decolonization; many African states sought to be neutral during the cold war; Europeans turned towards Asia’s booming markets as globalization took hold. Tellingly, the geopolitical buzzword of the moment is “Eurasia”. Europe and Asia are integrating along old Silk Road routes, especially under China’s Belt and Road infrastructure splurge, yet “Eurafrica” remains relatively little discussed. Europe is too busy rushing into Asia’s arms to embrace a continent on its doorstep which may be even more significant in the long term.