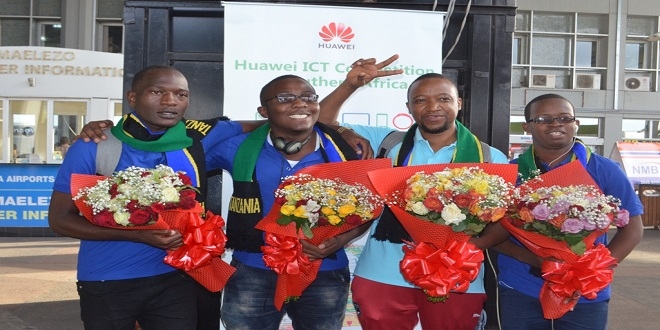 Students from Kenya and Tanzania emerged victorious at this year’s Sub Saharan regional finals of Huawei’s global ICT Competition and are thus set to represent East Africa in the finals which will see them travel to China.

Students from Nigeria and Tanzania were the overall joint winners of this year’s Sub Saharan regional finals of Huawei’s global ICT Competition. Together with second prize winners, Angola and Kenya, the four teams will travel to China for the finals which will see 40 teams from around the world compete for the championship title.

Speaking at the final award giving presentation, Mr. Xue Man, Vice President of Huawei, said, “Huawei understands the value of a good talent ecosystem which the foundation for a smart future is. This ICT Competition is part of our innovative initiatives to support that and promote ICT skills. We believe that this event will inspire more students’ interest in ICT learning in Africa; it provides them with a world-class stage to showcase themselves and consolidate the vital ICT needed for Africa’s development”

At the finals, held in Johannesburg, it came down to 42 students in 14 teams. They sat for theory and practical examinations at the finals at Huawei’s regional headquarters in Woodmead, Johannesburg.

“We are fully aware how important this is for our students to get good jobs and to become successful entrepreneurs. We are fully aware that this will drive our economy forward for many years to come if we can get it right,” Mr. Cheruiyot told the gathering.

Tanzania ICT student Emanuel Chaula was overjoyed that his team emerged as one of the two winning countries. He said, “We worked hard as a team because we wanted to seize the opportunity to get to travel to China to compete in the global finals. We really want to show Africa and the world that Tanzania is an up and coming ICT player and we want to be a part of that growth in our country. We will study and practice for the finals in China as we are going there to win.

The Huawei ICT Competition is a global ICT talent competition exchange event, which is aimed at the Huawei Authorized Information and Network Technology College (Huawei ICT Academy) and related universities. Since the first Huawei ICT Contest held in 2015, the number of participants in the competition has grown exponentially and has become one of the largest ICT events in the world. The 2018/19 event has attracted more than 1,000 universities in more than 50 countries around the world under the slogan “Connection, Glory and Future”. The total number of students participating global was 80,000 students, including 28 000 students from Southern Africa.

During the competition, through the road show, training, lectures and other special activities, the students will be able to pass on the latest technology, information and trends of the industry to the students and practitioners, and bring them closer to the theoretical study and practical experience level of students joining the job market and increase their competitiveness.

According to the schedule, the winners of sub-Saharan Africa will go to China in May to participate in the global finals in Shenzhen, China. By then, they will compete with the 40 teams from other parts of the world for the global finals