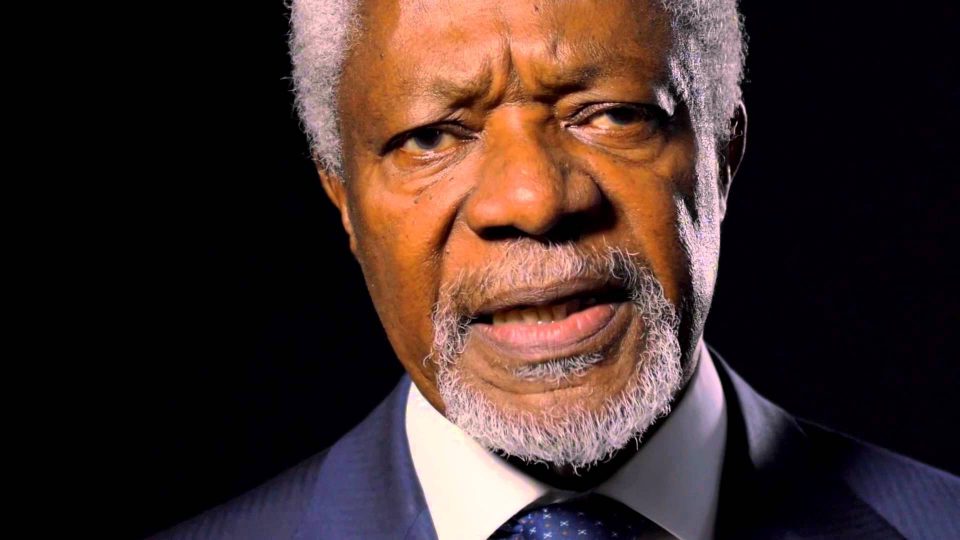 Kofi Annan, the first black African to lead the United Nations, has died at age 80. He served as Secretary-General at a time when worries about the Cold War were replaced by threats of global terrorism, and his efforts to combat those threats and secure a more peaceful world brought him the Nobel Peace Prize.

Annan, who was born in Ghana in 1938, served as the seventh UN Secretary-General, from 1997 to 2006, and was the first to rise from within the ranks of the United Nations staff.

He had also been a member, since 2007, of The Elders, a humanitarian group of a dozen leaders and activists of worldwide stature formed by Nelson Mandela. In 2013, Annan became its chairman.

The Kofi Annan Foundation confirmed his death with “immense sadness” in a statement posted on Twitter.

Annan passed away peacefully Saturday morning after a short illness, with his wife Nane and their three children by his side during his final days, the statement said.

The foundation paid tribute to Annan as a “global statesman and a deeply committed internationalist who fought throughout his life for a fairer, more peaceful world.”

“During his distinguished career and leadership of the United Nations, he was an ardent champion of peace, sustainable development, human rights and the rule of law.”

Annan was awarded the Nobel Peace Prize jointly with the United Nations in 2001 “for their work for a better organized and more peaceful world.”

Despite his many achievements, Annan’s record was not unblemished. He was head of the United Nations’ peacekeeping operations in 1994, when some 800,000 people were killed in the Rwanda genocide, and in 1995 when thousands of Muslim men and boys were massacred in Srebrenica.

Annan would later say that he should have done more to prevent what unfolded in Rwanda, and that events there and in Srebrenica had reshaped his global thinking.

As news of Annan’s death has spread, many are paying tribute to a man who became a global figure as head of the United Nations but was also known by those close to him for his warmth, style and charm.

Current UN Secretary-General António Guterres told CNN that Annan had been “an enormous source of inspiration” to him, adding that the late leader had been committed to his principles and values even if he had to pay a heavy price for them.

“He was not only a statesman, he was not only a leader, he was a warm person who would support his friends in difficult moments. He was a true colleague and a true friend,” he said.

US Ambassador to the UN Nikki Haley said Annan “worked tirelessly to unite us and never stopped fighting for the dignity of every person.”

“Kofi Annan devoted his life to making the world a more peaceful place through his compassion and dedication to service,” she added.

The UN Migration Agency tweeted: “Today we mourn the loss of a great man, a leader, and a visionary.”

UN human rights chief Zeid Ra’ad Al Hussein said he was “grief-stricken” over Annan’s death. “Kofi was humanity’s best example, the epitome, of human decency and grace,” he said. “In a world now filled with leaders who are anything but that, our loss, the world’s loss becomes even more painful.”

A statement from The Elders said its members were “shocked and deeply saddened” by his death. “Kofi was a strong and inspiring presence to us all, and The Elders would not be where it is today without his leadership,” said deputy chairman Gro Harlem Brundtland, adding that the group was resolved to continue to uphold Annan’s values and legacy.

NATO leader Jens Stoltenberg tweeted that the world had lost one of its giants. “His warmth should never be mistaken for weakness,” he said. “Annan showed that one can be a great humanitarian and a strong leader at the same time.”

Carl Bildt, co-chairman of the European council on Foreign Relations and former Swedish Prime Minister, described Annan as “a man of courage, wisdom and friendship” and urged people to read his 2001 Nobel Peace Prize lecture.

Ghanaian President Nana Akufo-Addo extended condolences on behalf of the entire nation and said the Ghanaian flag would fly at half staff across the country for a week, starting Monday. As the first person from sub-Saharan Africa to become UN Secretary-General, Annan “brought considerable renown to our country,” he said.

Zimbabwe opposition leader Nelson Chamisa said he had met with Annan only a few days ago. “A rare breed of diplomat; soft spoken but unshakably firm. He had great love for world peace & democracy,” he wrote on Twitter. “Go well son of Africa, Champion of the world!”

Annan was remembered in Kenya as the man who “saved the country from collapse following the 2007-2008 post-election violence,” Odinga said.

Russian President Vladimir Putin praised Annan’s efforts to build the United Nations’ peacekeeping potential in a telegram to Guterres, cited by Russian state news agency TASS. “I was lucky to personally interact with Kofi Annan. I have been in genuine awe of his wisdom and courage, of his ability to make informed decisions even in the most difficult, critical situations,” Putin said.

Iranian Foreign Minister Javad Zarif said he was extremely saddened by the loss of an “unwavering champion for peace, justice and rule of law” and a “dear old friend.”

Indian Prime Minister Narendra Modi said the world had lost “not only a great African diplomat and humanitarian but also a conscience keeper of international peace and security.”

Former US President Jimmy Carter, also a member of The Elders, said Annan “was a cherished personal friend and an inspiration to all who knew him.”

What shaped his global thinking?

Annan was descended from tribal chiefs on both sides of his family. After studying in Ghana and at Macalester College in St. Paul, in the US state of Minnesota, he joined the United Nations in 1962 as a low-ranking officer with the World Health Organization in Geneva.

He thought he would stay only a few years but ended up spending almost his entire working life with the organization.

While leading the UN’s peacekeeping operations, Annan was involved in decisions that were potentially career-ending but which he managed to survive.

In 1994, the UN Security Council and others including Annan were accused by the UN field commander in Rwanda of ignoring his warnings, which resulted in the world’s reluctance to send troops in and the estimated 800,000 deaths.

Speaking in 2004, Annan said: “I believed at the that time that I was doing my best, but I realized after the genocide that there was more that I could have and should have done.”

The next year, another moment came with the thousands of Muslims who were massacred in Srebrenica as Bosnian Serbs overran a UN “safe zone.”

The Secretary-General at the time, Boutros Boutros Ghali, took the heat for UN failings in two of the darkest episodes of its history. Subsequent UN reports about the body’s handling of the massacres were critical of Annan’s leadership.

On taking the helm as Secretary-General in 1997, Annan became a high-profile figure who championed human rights and urged the United Nations to protect civilians if their own governments turned on them.

His first term was highly-rated but his second term, which coincided with the US invasion of Iraq, was not as smooth.

Annan would later call the assault illegal. “I think the worst moment of course was the Iraq war, which as an organization we couldn’t stop — and I really did everything I can to try to see if we can stop it,” he said, speaking in 2006.

“It was an honor to work with him in his efforts to reform the UN, strengthen global health and peacekeeping, and reduce poverty. He made the fight against AIDS and the responsibility to protect civilians in conflict zones true priorities for the UN,” they said in a statement.

“After he left office, he continued his leadership on poverty, environmental, and peace issues through his foundation.” they wrote. “In every phase of his life, he held fast to his Ghanaian roots and set a powerful example of determined leadership while always treating others with respect and dignity.”

Former US President George W. Bush, whose pursuit of the Iraq war often set him on a collision course with Annan, paid tribute to him as “a gentle man and a tireless leader of the United Nations. His voice of experience will be missed around the world.”

“His integrity, persistence, optimism, and sense of our common humanity always informed his outreach to the community of nations,” Obama said.

In February 2012, the United Nations appointed Annan the UN and Arab League joint special envoy to Syria. Only six months later, he quit, citing increasing militarization in Syria and “the clear lack of unity” at the UN Security Council.

In a statement released by the United Nations, Guterres described Annan as both a personal mentor and an inspiration to all.

“He provided people everywhere with a space for dialogue, a place for problem-solving and a path to a better world. In these turbulent and trying times, he never stopped working to give life to the values of the United Nations Charter. His legacy will remain a true inspiration for all of us.”