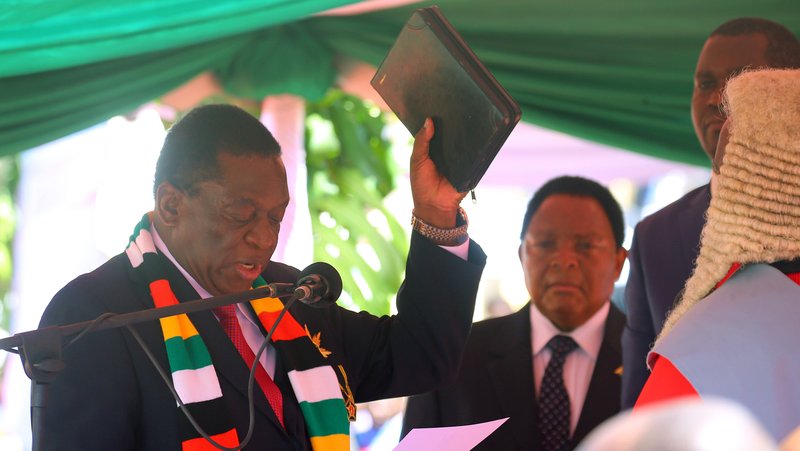 Mr Mnangagwa’s inauguration came days after the country’s highest court rejected an opposition challenge to his victory in the July 30 poll.

Many had hoped the elections would mark the beginning of a new era for Zimbabwe after years of international isolation and economic malaise. But the vote was marred by a post-election crackdown in which soldiers shot at least six people and opposition allegations of fraud.

The military crackdown drew condemnation from international election observers whose verdicts could be critical to whether western governments agree to help Zimbabwe clear debts and obtain an International Monetary Fund loan.

In his inauguration speech, Mr Mnangagwa said that “what unites us is greater than what divides us” as he promised to make public the findings from an official inquiry into the army shootings. The inquiry is yet to be set up.

Harare needs to clear about $2bn in debt arrears to multilateral institutions, most of which is owed to the World Bank, to be able to borrow new loans. Negotiations over financing to tackle the debt have been in limbo for years, with the government cash-strapped and grappling with a dire shortage of US dollars.

Mr Mnangagwa’s challenge will be to convince donors he is serious about genuine reforms after the disputed election.

A joint mission of US election observers on Saturday said the vote was “seriously marred”. “Zimbabwe has not yet demonstrated that it has established a tolerant, democratic culture that enables the conduct of elections in which parties are treated equitably and citizens can cast their vote freely.”

The opposition refuses to accept the election results. Zimbabwe’s constitutional court on Friday rejected a challenge to the presidential poll by the Movement for Democratic Change, the main opposition. The party claims that the ruling Zanu-PF party doctored votes to secure Mr Mnangagwa’s narrow victory over Nelson Chamisa, the MDC’s candidate, in the presidential poll. The court said the claims were unsubstantiated.

Mr Mnangagwa, a long time acolyte of Mr Mugabe, secured just under 51 per cent of the vote, meaning he narrowly managed to avoid a run-off.

Mr Chamisa said on Saturday that he had a “legitimate claim that I am supposed to be leading the people of Zimbabwe”.

Mr Mnangagwa used the inauguration to read out a letter of congratulations from Mr Mugabe, who had ruled Zimbabwe since independence in 1980. Ahead of the poll, the 93-year-old had disowned Mr Mnangagwa, his former deputy, and Zanu-PF.

Top 10 most educated presidents in Africa 2022