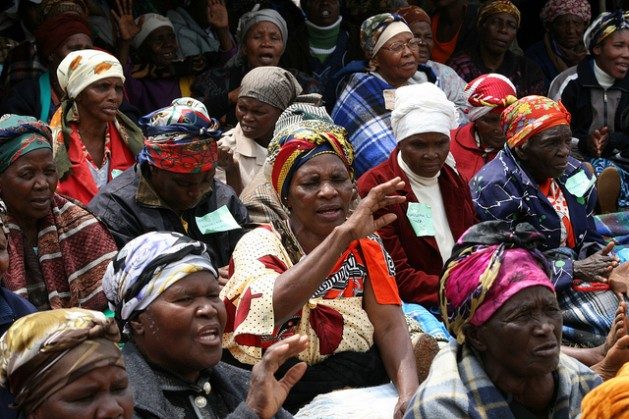 THE problem of gender inequality in Nigeria has been on the rise for decades, as modern society has redefined the role of women, which is vastly different from what it used to be in the Middle Ages. However, patriarchy and gender inequality is always a touchy topic when it comes to Africa because it is largely influenced by religious beliefs and diverse cultures. Nigeria is not left out. In the northern part of Nigeria, women are still largely considered inferior to men, as they are only seen fit to be home keepers and child bearers.

Moreover, some would argue that the idea that women are inferior to men is not limited to the northern part of Nigeria alone, but rather, it’s all over the country. This notion was in some ways re-enacted when President Muhammadu Buhari, said at a press conference in Germany two years ago that a woman’s role is in the kitchen and the “other room.” Though this statement was made regarding his wife, the whole world conceded that, it’s probably the way Nigeria, as a country, sees her women, and who would not agree? There are ideologies behind gender inequality in Nigeria, whether it’s cultural or religious, it stems from somewhere, and its lengthy existence simply means the causes are as strong as the impacts.

The most pathetic aspect of it all was the recent Gender and Equal Opportunity bill which was tabled before the Nigerian Senate to discuss and pass into law, was thrown out during the second reading when majority of the senators voted against it. Arguments erupted as to whether the Nigerian society was ready to concentrate such immense power in the hands of a ‘weaker’ gender, to the ‘un-Africanness’ of such a bill, to the conservation of the Nigerian institutions to any form of equality (gay rights among others). Indeed, the media has been avid about this development for about a year.

So, what exactly does the Gender Equality bill entail? The bill was aimed at promoting women’s freedom of movement, female economic activities and girls’ access to education. It seeks the adoption of temporary measures to eliminate discrimination, ensure equal opportunities for women as well as advocate appropriate measures against gender discrimination in political and public life. It also seeks to enshrine the prohibition of violence against women into the Nigerian legislation.

Some members of the Senate condemned the bill and urged Nigerians to stick with either religious or traditional marriages, while others condemned the bill for being in conflict with the Nigerian Constitution. Some other members of the public believe that supporting the bill means supporting the same measures that currently undermines the marriage institution in developed countries.

This brings us full circle to the influence of culture, tradition and religion in the legislation of bills and rights for the populace. Deeply enshrined in the present- day African culture is the ‘headship of the man’ in all areas of life: marriage, business, society. A Nigerian woman is automatically expected to defer to the man, any man by virtue of his being male. The African culture views women as property to be owned, hence the reason for this whole conundrum in the first place. And while women have found ways and methods to breach the social strata and make good for themselves in every walk of life, the cultural barriers on their gender still exist and come to the fore when circumstances arise. Though tradition is said to be the custom of a particular society, while culture is simply the way of life, but when was the last time you heard of a female traditional ruler among the ethnic groups? The reason it has never happened is that it is deemed an abomination in almost every ethnic group.

For instance, the death of the husband signifies the beginning of struggles for his widow in most Nigerian societies. Through child care and upkeep, to property inheritance (especially when there’s no will involved), to whether or not she marries and to whom, the woman’s fate is not secure outside of her husband’s lifetime. The woman does suffer and subject to ridicule and molestation when her husband dies, which contributes to the backward movement of gender equality. At least a widow should not be ostracised from the family affairs because she took most active roles in building “family affairs and children upbringing” before the husband kicked the bucket.

And what about the rights of women in divorce cases? It doesn’t matter how long the woman has been with the man or how much input she has in his life or property accrual, she is almost always left in the lurch after the divorce, except in very few cases. It seems almost clandestine for women to want to occupy a political position or the hot seat in a company. Such a mentality is usually created and forged by a woman’s immediate environment. If you’ve never seen a woman lead, you would think that it is normal for women not to lead even if you weren’t directly told, right?

They even said, ‘when you educate a woman, you educate a nation,’ but this is pointing more towards some parts of Nigeria that are rejecting western views on women, to stick to cultural one. Education is nothing if you leave all you learn in school and still behave like a savage when you get back home. It must be obvious that you are educated. There are two ways to this, a community that’s poorly educated can never know the worth of women and a woman that is not educated cannot know her rights, how much more the myriad things she’s capable of contributing to the modern society.

This writer is of the view that Nigerians and her different nationals should go back to the basics of their culture and review traditions that are obsolete and negative. Before any real change can be achieved in the Gender Equality rhetoric, there has to be a mass change of paradigm. Not only should men be reminded about the economic, social, cultural and political importance of women, women also should be reminded.

For who are the enforcers of the culture that makes women subservient? And who enforces widowhood rites? Who holds the female children down for genital mutilation? Who tells women to go back home to an abusive husband repeatedly until he beats the life out of her, so as not to bring disgrace to their family name? Who allows their children to serve as domestic help, thereby putting them in compromising conditions?

The list is endless. And in each situation, the ‘crab in the bucket’ syndrome plays out, in which women antagonise women in the name of culture.

In fact, a female boss is likely to be more unsympathetic/unfavourable to a female subordinate because, after all, ‘hasn’t she been there, done that’?

Hence, the female folk seem like a house divided against itself. With one side of the mouth, they ask for equal rights and opportunities, and with the other side of their mouth, they ask for preferential treatment because, well, they are women. Women have to be reminded that excellence has always been celebrated because excellence knows no gender. Even in a typical African society, where women are to be seen and not heard, there were still some distinctly excellent women that made marks in their generations ( Former  President of Liberia, Ellen Johnson Sirleaf, anyone?). In the concept of African religion, the presence of goddesses playing complimentary roles with the gods shows that women cannot be repressed, no matter what.

That is why I said earlier that Gender Inequality is not strictly an African issue, but a global issue. It is only prevalent in the African context because our society provides a fertile environment for it to germinate, widen and evolve in all aspects of life. For instance, a woman walks into the police station to report domestic violence and she is told to go back and behave (read: submit to your husband) because it is a domestic matter. Or a woman goes to report rape case and she is asked whether she screamed enough to attract attention, what she was wearing and whether she somehow asked for it? Though, the writer believes that much more than constitutional amendment for gender issues is needed, Nigeria needs a cultural amendment as well. While in no way trivialising the Gender Equality bill, perhaps we should do our bit to change our cultural paradigm first to align with the purpose of the bill since it has been thrown out. Without the bill being passed, its purpose can still be achieved, thanks to recent publicity it generated. This is a call for both sexes to complement each other rather than compete to build a society worthy of emulation; a society where women’s rights are protected during their husband’s lifetime or after, a society where domestic violence is eschewed, erased permanently, where female mutilation is non-existent, where female education is guaranteed, where work-place discrimination is reduced and where the distinction between rape and consensual sex is widely made.