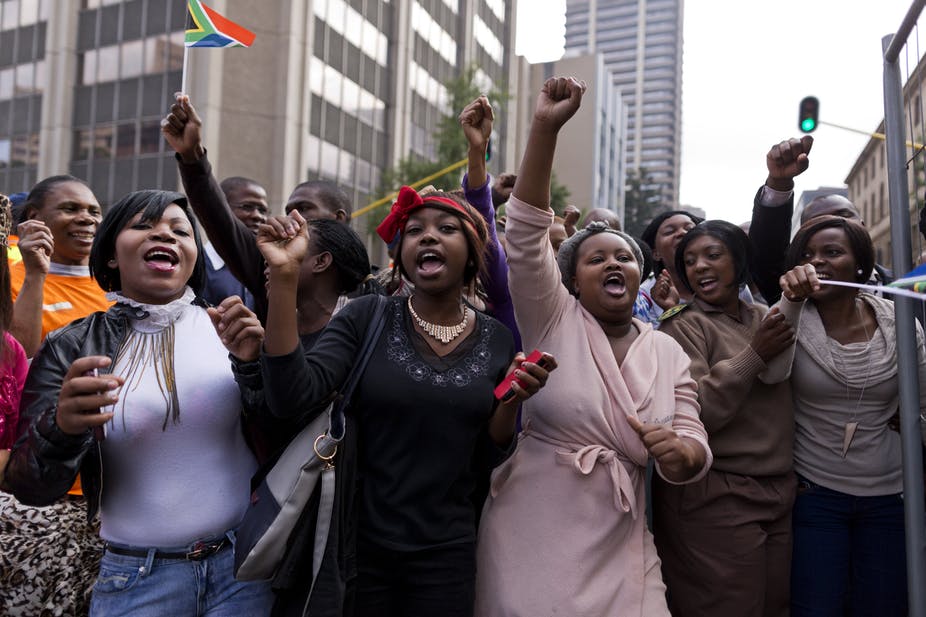 In a world where more often than not women are treated as second class citizens despite their huge contributions, sacrifices and support to keep the world sane and habitable, I join my voice with that of all feminists to say ‘’Equality is our goal, Access is our right’’.

The dictionary defines woman as ‘an adult human female’. The Bible, the holy book of the Christians indicates that ‘’Creation was not complete until God created Woman. President Vladimir Putin of Russia in his address to Women on the last International Women’s Day, March 8TH 2019 in Moscow, Russia, hailed the females as ‘’those who find time for everything at work, and at home, yet remain beautiful, bright, charming and the center of gravity for the whole family, uniting it with love, as well as having ability to support, comfort and console’’.

Political Space is said to be ‘the avenues, opportunities and entry points available for citizens to express their voice and influence political process and outcomes.

The principle of the right to equality and the prohibition of discrimination, which are at the basis of women’s access to public and political life are enshrined in the founding document of the United Nations  known as the United  Nations Charter’. The Universal Declaration of Human Rights (UDHR)which forms the basis of the bill of rights of many national constitutions, also enshrines the entitlement of all persons to non -discrimination including on the basis of sex.

Unfortunately, this stipulation has not been entirely adhered to, as lots of women remain deprived of partaking in the political process and even the few participating are not allowed to hold substantial positions. Ms Pulma Mnayi , Director of the Gender Advocacy Programme, a South African lobby group once said ‘’it is a reality that traditionally, women have always been given positions as deputies to men without any real power or significance.’’ There is this erroneous belief that only Men are born leaders. This poor orientation begins from as early as childhood, when girls begin to experience challenges that can limit their political participation and leadership later in life, all fueled by prevailing social norms and cultural attitudes that discourage girls’ and young women’s political activism. Thus, females are being relegated to play behind the scene supportive roles that account for the successful regimes of their male counterparts most times.

The need to change this mentality has brought about the laudable campaign for Gender Equality by feminists.  Feminism has been described as the oldest and most universal struggle against human oppression. It is centered on the advocacy of  women’s   rights on the ground of equality of the sexes. This category of persons is not restricted only to females,as there are men who confidently refer to themselves as feminists being that they believe in, as well as promote the cause feminism pursues. The journey to feminism and the experience of feminists has been portrayed as both a personal and political one, a choice that every woman can and should make because no other political discourse or practice provides the full possibilities to a life of wholeness and dignity for all women. Little wonder why Chimamanda Ngozi Adichie says ‘’we should all be feminists.’’ Women’s equal participation in politics is a crucial step towards achieving Gender Equality, the Sustainable Development Goals and progress for all. ’’ In line with the theme of the 2019 International Women’s Day, women must begin to ‘’Think equal, build smart and innovate for change.’’

’The fourth World Conference on Women, held in Beijing in 1995, drew attention to the persisting inequality between men and women in public life and political decision-making. The Beijing platform even went ahead to set a target for women to hold 50% of managerial and decision –making positions in the United Nations by year 2000. Regrettably in this year 2019, that target remains unmet. As only 24% of all national parliamentarians were women as of November 2018, a slow increase from 11.3% in 1995 and as of January 2019, 11 women are serving as Head of State and 10 as head of government.

The 2011 United Nations General Assembly resolution on women’s political participation notes that  ‘’ Women in every part of the world continue to be largely marginalized from the political sphere, often  as a result of discriminatory laws, practice, attitude and gender stereotypes, low levels of education, lack of access to health care and the disproportionate effect of poverty on women.’’ Although, some individual women have overcome these obstacles with great acclaim, and often to the benefit of society at large, there is still need to level the playing field for women as a whole, thus opening opportunities for all.

The UN Women estimates that globally, Men represent 77% of parliamentarians, 82% of government ministers,and 93% of heads of state. Hence, it makes global headlines every time a woman  reaches top of an organisation or political party.The latest Global Gender Gap Report of the World Economic Forum shows that it will take another 99 years for the world to achieve gender-equal political representation if we continue at our current pace.  This is a clear indication of how ineffective societies are at tapping into the potentials and talent of more than 50% of the population.

The attainment of gender equality and the full participation of women in decision making are key indicators of democracy. Equality between women and men is a matter of human rights, it is a condition for social justice which is a very necessary and fundamental prerequisite for development and peace. The full and equitable participation of women in public life is essential to building and sustaining strong, vibrant democracies. Besides, research suggests that gender balance in the political sphere promotes gender balance in the workforce. This represents tremendous economic potential, as evidence shows that gender equality in the work force could lead to doubling women’s contributions in global GDP growth by 2025.

Women’s participation in politics helps to advance gender equality and affects both the range of policy issues that get considered, as well as the type of solutions that are proposed. Evidence has shown that countries with higher engagement of women in public life experience lower levels of inequality. Furthermore, it is an established fact that investing in women’s right to political participation is a necessary step to achieving global gender equality and democratic governance, which our beloved continent Africa is in dire need of. One time Secretary General of the United Nations, Kofi Anan stated that ‘’study after study has taught us there is no tool for development more effective than the empowerment of women.’’ It has also been acclaimed that when women are empowered as political leaders, communities experience higher standards of living; positive developments are seen in education, infrastructure and health, with concrete steps taken to help truly deliver democracy.In the words of the National Democratic Institute Chairman Madeline Albright, ‘’women in power can be counted on to raise issues that others overlook, support ideas that others oppose and seek an end to abuses that others accept. ‘’

Indeed, the contribution of women to what Africa is today is unquestionable and must be encouraged. Consequently, likeother parts of the world, the continent ofAfrica is beginning to recognise the growing recognition of the untapped capacity and talents of women and women’s leadership. The new trends in the participation of women show a positive improvement in the participation of Women in Africa. The shallow mentality that ‘’a woman’s place is in the kitchen’’ is fast losing its popularity, as this narrative is being changed by the impressively increasing female outstanding participation in politics,  governance and many other spheres of life, females who keep shattering the glass ceiling. Currently,Rwanda ranks first globally as the champion of women participation in governance, with more than fifty percent of women in its elected public offices and this experience has proven to be a referenced landmark not only in Africa but for all democracy.There is no doubt that progress has been made in increasing Women’s political participation in Africa so far, with women like  Aja Fatoumata Jallow Tambajang of Gambia, Proscovia Alengot Oromait of Uganda, Lindiwe Mazibuko of South Africa  all playing meaningful roles in guaranteeing  meaningful development in their countries. The election of  Ellen Johnson-Sirleaf of Liberia as the first female African Head of State in 2005, was  a milestone in women’s representation at the highest level of national decision making.On October 25th 2018,the African Women again made great strides in this regard with the election of Sahle-Work Zewde as the first female President of Ethiopia and only current female head of government in Africa.While all these mentioned above are highly commendable, a lot more still needs to be done to bring all nations within the continent up to date with the trend of increased female political participation, including Nigeria which ranks as one of the lowest in terms of female participation in parliament, a poor 181st out of 193 countries, a rather poor one for the Giants of Africa.

It is often said that ‘’ if you want something said, ask a man and if you want something done ask a woman. Madeline Albright rightly stated ‘’that the world is wasting a precious resource in the dramatic under representation of  women in leadership positions, often resulting in the exclusion of women’s talents and skills in political life.’’  It is not enough to identify and acknowledge the lapses; steps must be taken to fix things.  Moreover, no one can actually represent the interests of Women more than they themselves, since they know their situation better.