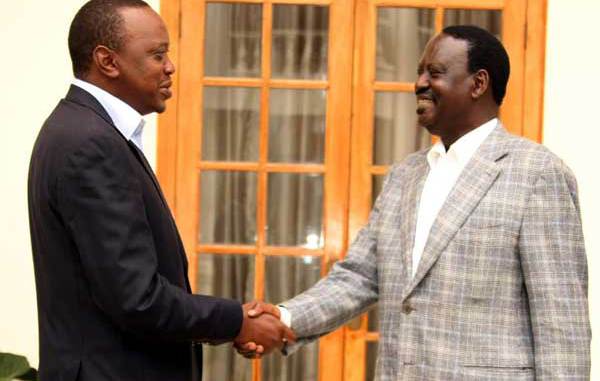 In a rare show of unity, President Uhuru Kenyatta and Opposition leader Raila Odinga told Kenyans they had set their differences aside and would work to unite the public.

The two met at Harambee House office of the President before addressing the press recently.

Raila, who was first to speak, noted ethnic division came to an end today and that he and his ‘brother’ will bridge the existing gap.

But today, the Nasa chief and ODM party leader said they resolved to end animosity before Kenya sinks.

“We refuse to allow our diversity to kill our nation. We have travelled so far … we cannot make it to our destination without bridging the gap,” he said.

In his passionate address, Raila noted Kenyans cannot fathom why they are disagreeing as politicians fight for their souls.

“We need to save our children from ourselves. My brother and I have come together to say ‘this dissent stops here’. We refuse to allow our diversity to kill the nation.”

The veteran Opposition chief went on to speak about self-reflection, which he said was one of the factors that motivated his and Uhuru’s decision.

He said they want change and warned that “so long as we remain divided, selfish and corrupt, no amount of reforms will prosper [and attention will be diverted] to blame games.

“We have been pouring new wine into old wine skins. We need leaders to secure the goals of peace, unity and justice. Such a time has come for Kenya,” he said.

In his address, the President assured Kenyans of a new political beginning following his meeting with Raila – he noted they had an opportunity to extensively discuss matters ailing Kenya.

“All we want is a common understanding that Kenya is greater than any one individual. Leaders must come together and discuss their differences on what ails the country like ethnic divisions across the country,” Uhuru said.

The president said the meeting today with Raila will be key to solving political indifference that have triggered inter-communal conflicts in some areas like Wajir, West Pokot and Marakwet.

“We have a responsibility to discuss and find solutions that will bind, unify and give a life cycle beyond the five years we have given ourselves. Elections come and go but Kenya will remain,” Uhuru said.

He said, “Our future cannot be dictated by an election but stability and the well being of the people. Election is only a process in which the will of the people is heard”.

“We now mark a new beginning as we match together on bringing our people together. We look forward to the support of every leader and every Kenyan,” Uhuru added.

The head of state said the move aims at having a Kenya where no individual feels left behind or left out.

We can differ politically but we must remain united on matters affecting Kenyans, he said.

Uhuru early this year said he was willing to engage the opposition.

He however cautioned that his government will not hesitate to take stern action against any leader or citizen who breaches the Constitution.

Uhuru, who had ruled out any talks with the opposition leader saying he was willing to engage with all Kenyans – including the NASA leaders – in focusing the nation on economic transformation.

“I am willing to commit to and engage with all Kenyans and all Kenyan leaders, including my competitors; irrespective of their religious or ethnic affiliations in fashioning this new paradigm shift,” said Uhuru.

Uhuru was categorical that any talks around elections should wait until 2022.

“Any dialogue on a political issue should wait until 2022, and dialogue with Ruto, because I will be retiring,” said Uhuru during the burial of Susan Wairimu, the mother of Murang’a Woman Representative Sabina Chege, in Kigumo, Murang’a county.

Earlier in the week, Raila said the Opposition will use “other ways” to end electoral injustice if Uhuru’s Jubilee Party doesn’t want to dialogue.

“We are ready for dialogue but if Jubilee [leaders] are not ready we will use the other way to bring the end to electoral injustice in the country.”

Kenyans have been fearful of violence since the 2007/8 killing of at least 1,300 and displacement of more than 600,000 people over a disputed election that saw Raila vie against Mwai KIbaki.

After last year’s election, Raila said at least 250 of his supporters were killed, especially in Nasa strongholds of Kisumu, Homa Bay, Migori, Siaya and parts of Nairobi.

Raila said Nasa and Jubilee must sit down and talk to formulate a way to deliver the country from the current political stalemate.

Jubilee has frequently accused the former Prime Minister of creating intolerable turmoil as a way of getting into government through the backdoor.

Raila says he won the August 8 poll and cannot engage in talks for another a nusu mkate (coalition) government. He said it was William Ruto – now the Deputy President – who pushed for coalition talks in 2008.

But Raila  maintained he does not recognize Uhuru as the President of Kenya saying they will continue to push for electoral reforms through civil disobedience.

Close allies of the Opposition leader disclosed that NASA was working on a petition to challenge Uhuru’s legitimacy at the New York-based global agency.